As Lleyton Hewitt looks ahead to his last Wimbledon campaign, JAYMON CRABB is experiencing an inside view as his coach. He provides some insights on Hewitt's preparation. 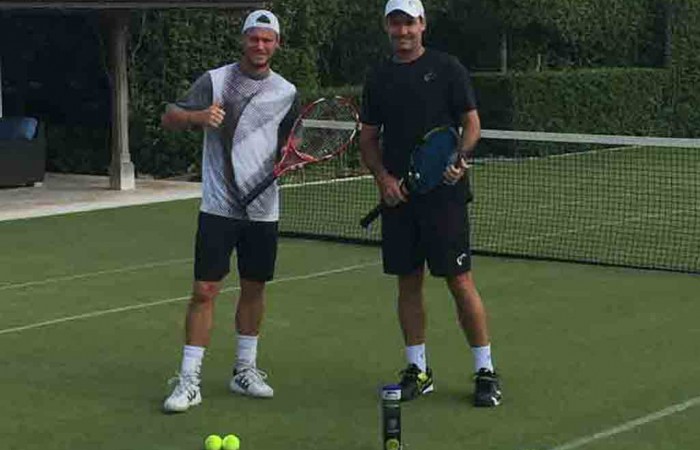 Growing up in Australia, Wimbledon was always a massive deal. Like many other teenagers in Western Australia I played and followed Aussie Rules football and cricket, but when Wimbledon came around I used to love spending late nights watching the telly and waiting for the next Aussie champion. I was born in 1978 so from that time on, our Wimbledon champions were few and far between! Gone were the golden years of Australian tennis where Harry Hopman would turn up with an army of contenders; tennis had gone worldwide and competition was tough! After Newk won it in 1971 our next champion would be Pat Cash in 1987. From there we had to wait for Lleyton Hewitt in 2002. And here I am, coaching Lleyton at his last Wimbledon in 2015.

It’s Saturday 30 May and we have just landed at Heathrow airport, London, England. It is only fitting that we take the traditional old-fashioned English taxi to our base for the next six weeks in Wimbledon Village. The Championships don’t start for another 30 days and most competitors are still slugging it out on the clay courts of Roland Garros. Walking the streets of Wimbledon Village with Lleyton is eerily exciting as he embarks on his last hooray on the famed grass courts of SW19.

Our first stop is a Lebanese restaurant he frequents every year for lunch. The owner and workers are excited to see Lleyton and greet him with handshakes and hugs, exclaiming, “Lleyton, what are you doing here so early? Lunch is on the house!” People in the street recognise him, and often come up excitedly, saying “Oh! You are Lleyton Hewitt!” He smiles as he replies “Yes,” and they walk away thrilled to have seen and talked to a living legend of the game.

Wimbledon is so different to the other Slams. Tradition runs thick and you feel it as you walk through the grounds. The Wimbledon Village is a special place and a point of difference to other Grand Slams. There aren’t many hotels around Wimbledon and lots of players will rent out houses for themselves and their teams. I’m sure the homeowners use this time (the start of the English summer) to go on holidays and still make a packet on the house renting!!! Players and homeowners become friendly with players often renting the same house year after year, especially if they have a good result at The Championship, and it almost becomes a home away from home. Once Wimbledon starts, the Village will be a hive of activity with players and both English and foreign fans from far and wide lining the streets and frequenting restaurants to catch a glimpse of their heroes.

But for now, there are no other players here and because of his 2002 achievement Lleyton is a member of The All England Club. All Wimbledon singles champions are given membership and with that we can hit on the courts, use the locker room, use the gym, and warm up areas. These sacred sites are forbidden for most players until The Championships start and even then only seeded players will be allowed in the members’ locker room. Other players cannot hit on the famous grass courts and must try to find alternate sites to hone their grass court games.

In the locker room the attendant, Gary (in his 11th year as member locker room attendant), is thrilled to see Lleyton. He would do anything for us — book courts, laundry, pick up packages from the post office, and give us the new official 2015 Wimbledon balls.

Like Gary, all of the staff in Wimbledon are well-dressed and very courteous. There is protocol and it is abided by. I like the All White dress code for players and members. If you want to hit on the All England courts you must wear all white clothing and shoes. Your coaches will not be able to stand around if they aren’t wearing all white. There are intricate details everywhere. For example, the Robinsons cordial in the change rooms has been there umpteen years, and it is also on every court during Wimbledon situated on the umpire’s chair. So, if a player needs a sugar hit, it is right there for them! These days, players are too professional and have their own stock standard electrolytes and carbohydrate/protein replacement drinks that they drink week in week out, but I love that the Robinson’s cordial is still a constant in the Wimbledon tradition!

As I reflect on Australia’s place in this Wimbledon tradition, I still remember vividly Lleyton trying to serve-volley on match point against David Nalbandian (it would have been the first serve-volley for the whole match!). He double faulted — and then on his next match point, he took the title and fell on his back with his arms outstretched. A monumental achievement and one that still brings goose bumps just thinking about it.

I don’t know who the next Aussie Wimbledon Champion will be but I hope Lleyton can get hot this year and make a run and I personally know he has put in the work. He has done the extra work, in the gym, on the track and on the court. If there were extra inches to gain he has gained them.

This is about the character of the individual. It is very simple: Rusty wants to win Wimbledon and leave as a Slam champion. Whether or not that happens, and however close he gets, he will know he gave it his all. If he loses — and trying to be the one winner out of 128 is quite a hurdle — he will know it was because his opponent was too good and he will know he left it all out there on the court.