Australia's Wimbledon stocks have taken a hit as seeded spearheads Bernard Tomic and Nick Kyrgios race the clock to be fully fit for the tennis showpiece starting in less than a month. 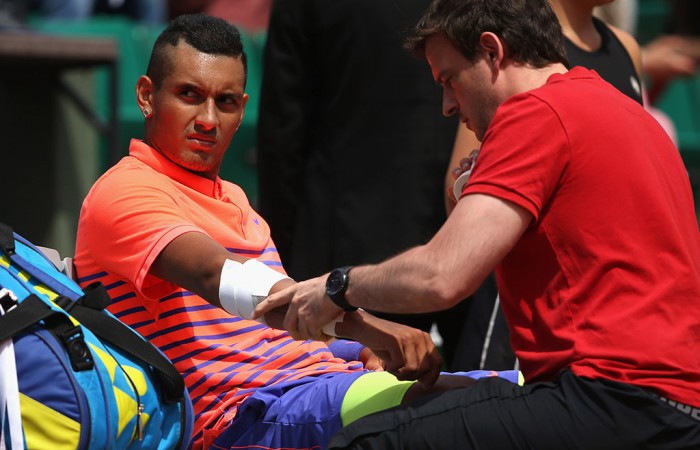 Australia’s Wimbledon stocks have taken a hit as seeded spearheads Bernard Tomic and Nick Kyrgios race the clock to be fully fit for the tennis showpiece starting in less than a month.

Kyrgios and Tomic, along with several of their exciting young support cast, departed the French Open set for career-high world rankings after encouraging campaigns in Paris.

But a shattered Kyrgios is considering withdrawing from Wimbledon lead-up events next week at ‘s-Hertogenbosch and then the Queen’s Club after a chronic elbow injury flared in his third-round loss to Andy Murray.

Tomic plans to press ahead with scheduled appearances next week in Stuttgart and Halle from June 15, but requires cortisone injections for a back problem that’s restricting his movement.

Tomic, a quarterfinalist in 2011, and Kyrgios, who reached the last eight at the All England Club last year, are projected to climb to 24th and 25th respectively in the rankings next week.

Unlike the other three major events in Melbourne, Paris and New York, Wimbledon officials don’t strictly abide by rankings when allocating their seedings and Tomic is hoping he and Kyrgios are elevated because of their proven records on the hallowed grass courts.

Critically, a top-24 seeding would guarantee Australia’s two big guns don’t run into any of the top eight, including titleholder Novak Djokovic and fellow former champions Roger Federer, Andy Murray or Rafael Nadal, until at least the round of 16.

But the duo’s more immediate concern is being fully fit and ready to go when the grasscourt major gets underway on 29 June.

“I don’t know what I have to do at the moment. I don’t know what the problem is,” Kyrgios said after being unable to serve anywhere near full speed during his straight-sets loss to Murray at Roland Garros.

“I have done so much (remedial and rehab work) and it’s pretty heartbreaking going out there and something like that holding you back.

“But I will do everything I can obviously to get ready for Wimbledon. That’s the next big one. I think that’s my best chance to win a Grand Slam.”

Tomic said he’d been dogged by a back injury for months.

“I need to get a few injections in my back, which I’ve never done before,” he said after Davis Cup teammate Thanasi Kokkinakis ended his French Open in a five-set second-round thriller.

“Hopefully that goes away after three or four days because I have been suffering a lot of pain, (lost) a lot of rotation, missing on my shots.”

In addition to Kyrgios and Tomic’s troubles, Daria Gavrilova, Australia’s new No.2 ranked woman who had been pushing towards a Wimbledon seeding, has had to pull out of scheduled events in ‘s-Hertogenbosch and Birmingham with an abdominal strain.

The injury forced Gavrilova, set to rise to 42nd in the rankings, to quit her second-round match in Paris against Sabine Lisicki.

Australian No.1 Sam Stosur is taking a two-week timeout in Florida after being left furious by her third-round misfire against Maria Sharapova and will contest only one Wimbledon warm-up event at Eastbourne.