Thanasi Kokkinakis has overcome injury, a two-set deficit and three match points to oust compatriot Bernard Tomic at Roland Garros; world No.1 Novak Djokovic is next. 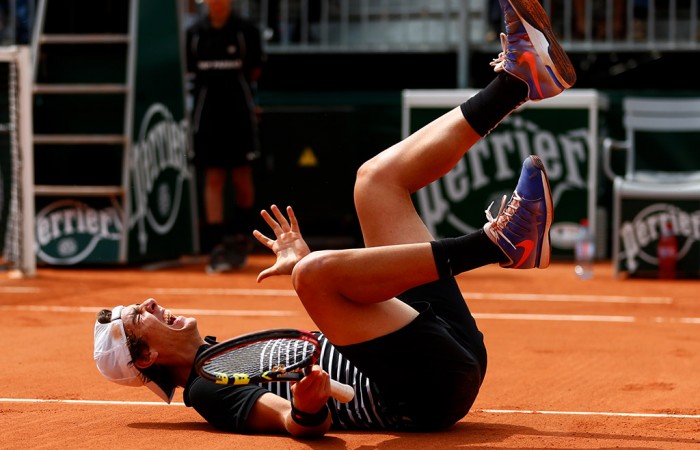 Kokkinakis looked to have cruelled his chances after hurting his hip and cutting his stomach in a nasty tumble deep in the fourth set.

“Physically I felt pretty good the whole match though. Just trusted the work I did all through. I had a lot of matches so I felt like I had the miles under my legs. But, yeah, my hip is pretty sore right now.”

Djokovic confirmed his appointment with Kokkinakis with a 6-1 6-4 6-4 dismissal of Gilles Muller.

“I just can’t wait to get out there,” Kokkinakis said.

“I am going to give it what I got and hopefully I come out with the right result.”

Battling an energy-sapping virus, Tomic entered Thursday’s match under a fitness cloud, but he played two fine first sets to look in total command as Kokkinakis was unable to convert any of his first 12 break-point chances.

“Every time I didn’t take a break point it was like someone shot an arrow to me,” Kokkinakis said.

“I can’t even explain how berserk I was going. At one point I said, get me off the court. Luckily I didn’t.”

Kokkinakis seemed to have wrestled back control until his fall, with even Tomic believing his Davis Cup teammate was in big trouble.

“I actually thought he could have hurt himself a lot more,” Tomic said.

“I saw in the locker-room, he has a lot of problems in that thing, a lot of blood.

“I’m happy that he’s okay because that fall is much worse than it looked … he could have got a lot more injured because of that.”

Kokkinakis, who pulled off a similarly courageous five-set first-round win over world No.11 Ernests Gulbis, broke Tomic again to nudge ahead 7-6 and calmly served out the match after three hours and 22 minutes.

“He did a good job to come back. I kind of screwed up in the end,” Tomic said.

“Good credit to him.”