Teenage ace Thanasi Kokkinakis is playing the role of undertaker as he looks to put an ailing Bernard Tomic out of his misery at the French Open on Wednesday. 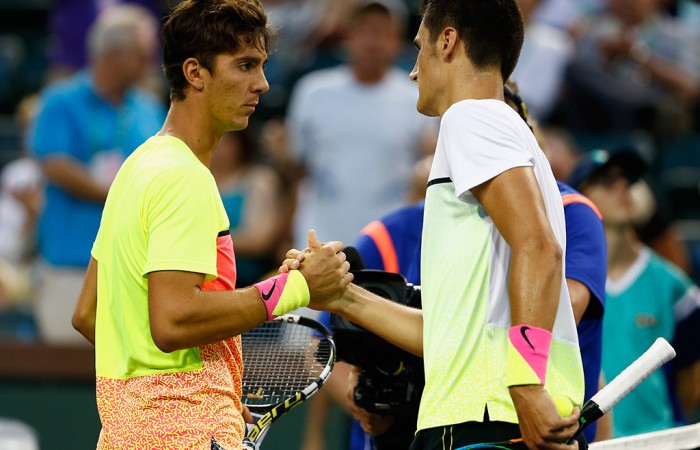 Teenage ace Thanasi Kokkinakis is playing the role of undertaker as he looks to put an ailing Bernard Tomic out of his misery at the French Open on Thursday.

The Davis Cup teammates will square off for a likely third-round shot at world No.1 Novak Djokovic.

“Yeah, I’d love to get a crack at Novak, but Bernie is a tough task,” Kokkinakis said after claiming his first-ever win at Roland Garros, a 3-6 6-4 7-6(4) 6-2 success over Georgian qualifier Nikoloz Basilashvili.

Tomic, the Australian No.1, climbed to a career-high 26th in the rankings on Monday and has beaten Kokkinakis in their two previous meetings, both on hard courts this year in Brisbane and Miami.

But the former Wimbledon quarterfinalist is battling a virus and playing down his prospects on his least-favourite surface, while Kokkinakis is oozing confidence after landing a claycourt Challenger title in Bordeaux last week.

“I said to him straightaway, I’m wearing black tomorrow,” Kokkinakis said after he, Tomic and the third member of Australian tennis’s three amigos, 29th seed Nick Kyrgios, all wore matching Nike outfits for their first-round victories in Paris on Monday.

“I’ve played Bernie a couple times. I’ve been on the worse end of the stick, but the last time I felt like I could have gotten him.

“It was pretty close in Indian Wells. I feel like I’m playing good enough tennis to knock him off. Should be a good match.

The 19-year-old is taking no notice of Tomic’s claims that he’s still under the weather after pulling out of last week’s Nice Open.

Tomic received assistance for dizziness during his 6-3 3-6 6-3 6-4 victory over Italian qualifier Luca Vanni, the 27th seed’s second claycourt win of the season and first at Roland Garros in three years.

“I was really feeling the fatigue out there so it was a good win for me,” Tomic said.

“I would like this sickness to go away because it has taken a lot out of me.”