Stosur safely through to round two

Scoring her fifth straight win after smacking 38 winners against an overwhelmed Madison Brengle, Sam Stosur has cruised into the second round of Roland Garros. 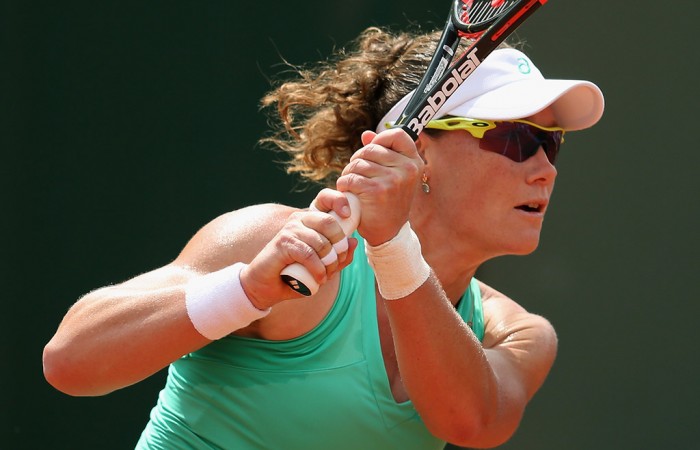 Sam Stosur expressed relief at overcoming a frantic French Open build-up to safely progress to the second round at Roland Garros for the 10th time.

Stosur’s 6-1 6-3 dispatch of American Madison Brengle on Monday edged the in-form 26th seed to within a win of a likely third-round confrontation with defending champion Maria Sharapova.

The former finalist and two-time semifinalist in Paris will be a raging favourite against lowly-ranked French wildcard Amandine Hesse on Wednesday, the player who ousted Stosur’s compatriot Jarmila Gajdosova in the first round.

But before plotting a path past the world No.272, Stosur was eager to come up for air.

Her last-minute acceptance of a wildcard into Strasbourg may have yielded a morale-boosting first title of the season, but it also left the Australian No.1 in mad scramble to make it to Paris.

She only arrived at midnight on Saturday before squeezing in brief practise session on Sunday and hitting Court 3 for her tournament opener less than 24 hours later.

The former US Open champion hadn’t even unpacked before powering past Brengle, the world No.36, in barely an hour.

“I have done a few loads of washing and there is stuff everywhere. I need to go to the supermarket to get some food,” Stosur said.

“You feel like everything has been kind of a whirlwind. Obviously this was a very quick turnaround, coming here and then playing straight away, so it was nice to get through this one.

“Now I feel like I can practice and then settle in, do a few things and then take it from there.”

Stosur’s resurgence since reuniting with long-time coach David Taylor last month – after falling out of the top 20 for the first time in five years – has raised hopes of another title push on her favourite surface.

“I have played some of my best tennis here. I like the court and the surface and everything else,” she said.

“Having said that, I have also had some disappointing experiences as well, so it doesn’t mean that is all plain sailing and that you are rolling in and everything is fantastic.

“But I know that my game suits here, if I can put it all together and keep doing what I am doing, I know that I can do well.”