Rising Australian tennis star Thanasi Kokkinakis' run of good form has been rewarded with a wildcard entry to the French Open. 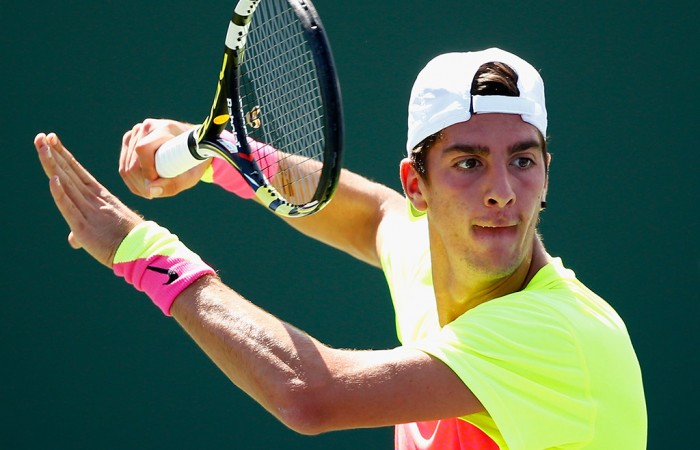 Rising Australian tennis star Thanasi Kokkinakis’ run of good form has been rewarded with a wildcard entry to the French Open.

Kokkinakis gained the Roland Garros green light thanks to the reciprocal agreement between Tennis Australia and the French Tennis Federation, under which the countries exchange wildcards for the Grand Slam tournaments they host.

The 19-year-old from Adelaide missed the six-week direct-entry cut-off point last month, but his recent form has pushed him to a career-high 98th in the world ahead of the French Open which starts on 24 May.

His compelling case for inclusion comes via qualification for a string of ATP Tour events this year, three of them elite Masters 1000 tournaments.

In March at Indian Wells he reached the fourth round before being knocked out by countryman Bernard Tomic.

Earlier that month he was the star of Australia’s Davis Cup upset over the Czech Republic, coming back from two sets to love down to beat Czech world No.42 Lukas Rosol.

Australia’s stocks for Paris are looking relatively strong this year with three seeded players in Tomic, Nick Kyrgios and Samantha Stosur, along with a string of direct entrants.