The future is looking bright for rising tennis star Casey Hoole after he was selected to represent Australia in this year’s Longines Future Tennis Aces to be held in Paris from 28-30 May. 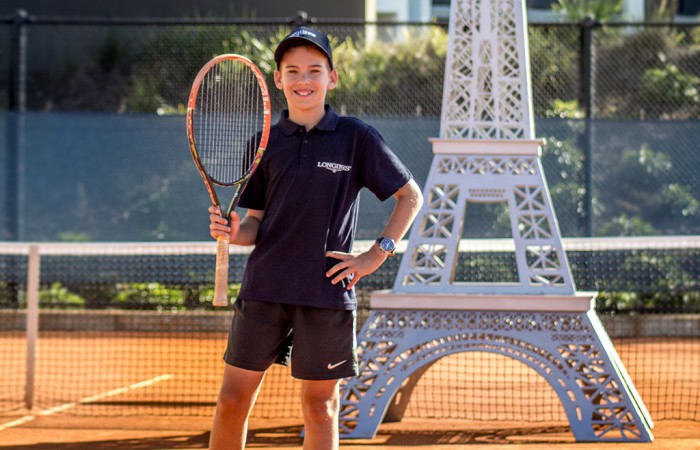 The future is looking bright for rising tennis star Casey Hoole after he was selected to represent Australia in this year’s Longines Future Tennis Aces to be held in Paris from 28-30 May.

Eatons Hill resident Hoole, 12, participated in a practice match today with Australian tennis legend, Todd Woodbridge, on a clay court at the Queensland Tennis Centre as a prelude to the tournament.

The young Queenslander was selected to participate in the tournament by a Tennis Australia panel, based on his national ranking and recent performances. He is currently the second highest-ranked player in his age group (born 2003) in Australia.

Hoole said he was looking forward to travelling to Paris to play.

“I’m so excited to have the opportunity to represent Australia in Paris. I’m going to give it my best,” he said.

Added Woodbridge: “To be selected to play at a tournament like this is a great opportunity for Casey.

“The chance to play internationally both inspires a young player but also gives them an understanding of how their game compares to other juniors from around the world. It’s an invaluable experience.

“The Longines tournament has been a springboard for a number of our young Aussie players. Destanee Aiava only a couple of years ago won the event. She continues to climb up the ITF junior rankings and is one to watch at the junior Grand Slams over the next couple of years.”

The Longines Future Tennis Aces tournament gives 16 talented children, aged between 10 and 12, the opportunity to showcase their ability in an international tournament as well as measure themselves against the best international tennis players in their age range.

Hoole will be joined by 15 other young talents to compete over two days of tournament to qualify for the final on Saturday 30 May.

In the lead up to the tournament, Hoole will participate in the Longines Academy, a well-renowned training camp that will see the young players receive invaluable advice along with a coaching session with former French tennis player Arnaud Clément. He notably won the Davis Cup in 2001 and is currently France’s Davis Cup captain.

Like last year, the 2015 exhibition will be played on a clay court in front of the iconic Eiffel Tower and aims to showcase tomorrow’s champions today.