Nick Kyrgios' run at the Madrid Masters is over, falling to big-serving American John Isner after day after toppling Roger Federer. 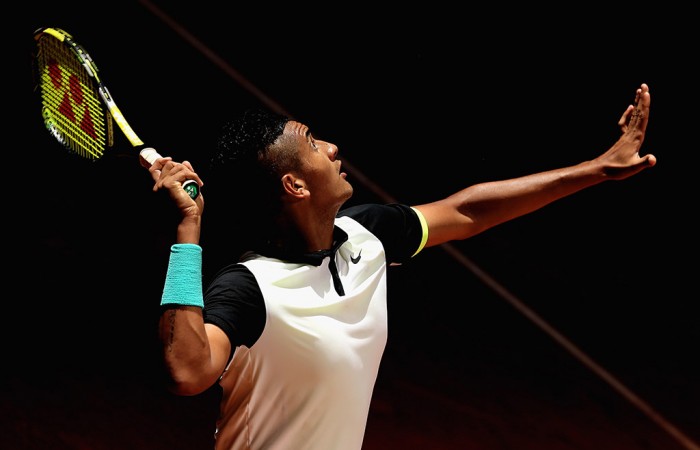 Nick Kyrgios’ run at the Madrid Masters is over, falling to big-serving American John Isner after day after toppling Roger Federer.

The American admitted Kyrgios appeared jaded after his win over world No.2 Federer and after making the finals of the ATP event in Portugal last weekend.

“For sure he’s a little bit tired. He made the finals last week (in Estoril) and had that incredible match last night against Roger,” said Isner.

“He had expended a lot of energy, whereas I was feeling great; the best I’ve felt all week. I feel awesome. The serving conditions were out of this world on that court.”

Rafael Nadal showed no signs of his recent slump as he eased past Italy’s Simone Bolelli 6-2 6-2 to reach the quarterfinals as he builds towards the French Open.

There were also straight sets wins for Andy Murray and Kei Nishikori.

Nadal has yet to win a European clay court tournament this season after defeats to Novak Djokovic at the Monte Carlo Masters and Fabio Fognini at the Barcelona Open last month.

However, he remains the heavy favourite in the Spanish capital in the absence of world No.1 Djokovic and will continue his quest for a fifth Madrid title against Bulgaria’s Grigor Dimitrov on Friday.

“Dimitrov is a very complete player, he is one of the best in the world,” said Nadal.

“He has already won three matches here, so he is at a good level again. He played very well against Wawrinka and (Fabio) Fognini.”

Murray and Nishikori stayed on course for a mouthwatering semifinal clash as they proved too good for Spaniards Marcel Granollers and Roberto Bautista Agut respectively.

It was Murray’s second victory of the day as he didn’t get off court until 3am local time in dismissing Philipp Kohlschreiber in the previous round.

But he enjoyed a far easier evening as he matched his best ever run on the clay in Madrid 6-2 6-0 in little over an hour on court to set up a quarterfinal clash with Milos Raonic, who beat Leonardo Mayer 6-4 6-3.

Next up for the Japanese is a quarterfinal meeting with David Ferrer after he an all-Spanish battle by coming from a set down to beat Fernando Verdasco 5-7 6-4 6-4.