Nick Kyrgios' reward for his huge win over Roger Federer at the Madrid Masters is an almost certain French Open seeding. 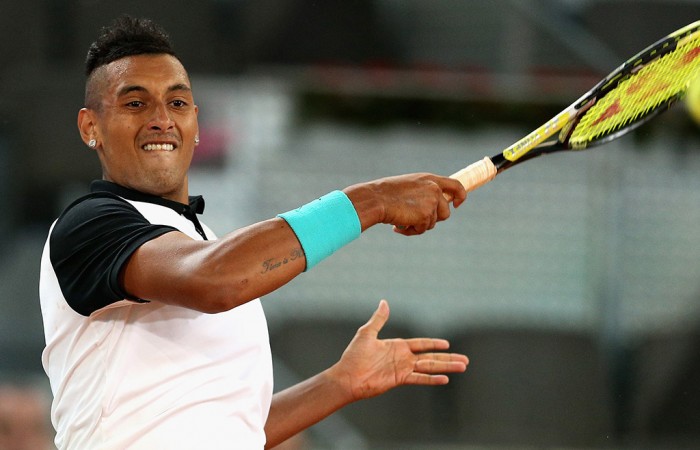 Nick Kyrgios’ reward for his huge win over Roger Federer at the Madrid Masters is an almost certain French Open seeding.

Kyrgios ranked his thrilling 6-7(2) 7-6(5) 7-6(12) victory over the top seed and four-time champion on Wednesday night above his stunning fourth-round triumph over then-world No.1 Rafael Nadal at Wimbledon last year.

“This is definitely the greatest win over my career so far,” Kyrgios said after saving two match points and clinching victory on his sixth to showcase his claycourt credentials in spectacular fashion.

“It was similar to that match at Wimbledon when I played Rafa. It’s a strange feeling. It hasn’t happened many times in my career. It’s happened twice now. It’s pretty exciting.”

The 20-year-old Australian is now the youngest player in more than a decade to have conquered both Nadal and Federer, his childhood idol, and first ever to do so while both tennis titans were in the top 10.

Novak Djokovic was two months older when he completed the double five months before securing the first of his eight Grand Slam crowns at the Australian Open in 2008.

“He’s got a wonderful serve, good potential, so I hope he keeps working hard and that he can compete for the best spots in tennis,” said Federer, who invited Kyrgios to train with him in Zurich before last year’s French Open.

Already at a career-high No.35 in the world after reaching his maiden ATP final last weekend in Portugal, Kyrgios is now all but guaranteed his first major seeding when the French Open gets underway in Paris on 24 May.

Australian Davis Cup captain Wally Masur has no doubts if conditions are warm and sunny that Kyrgios, already a two-time Grand Slam quarterfinalist, can cause some real damage at Roland Garros.

“With the big serve and power of his forehand, he can be very, very dangerous at the French.”

As Federer discovered in his first loss to a 20-year-old since falling to Juan Martin del Potro in the 2009 US Open final.

“My problem was I couldn’t return his first serve,” said Federer, who won only 18 of 85 first-serve return points and watched 22 aces whiz by.

Kyrgios said at Christmas that he considered clay his best surface before his run to last year’s Wimbledon quarterfinals.

He next meets American 16th seed John Isner for a spot in the quarter-finals.