Sam Stosur ousted the WTA’s in-form player on Sunday to advance at the Mutua Madrid Open, while Thanasi Kokkinakis qualified for the main draw of yet another ATP event. 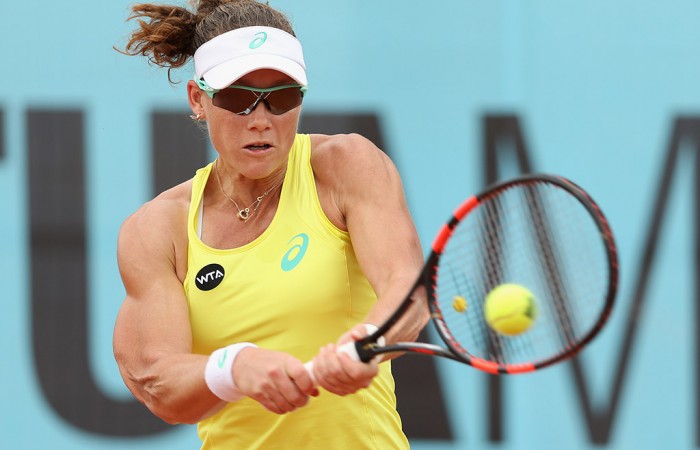 Sam Stosur has ousted the WTA’s in-form player to advance to the second round of the Mutua Madrid Open on Sunday.

Stosur recovered to beat No.12 seed Angelique Kerber 4-6 6-3 6-3 at the combined ATP-WTA event, winning in one hour and 40 minutes.

Kerber had built an 11-match winning streak after capturing the year’s two biggest claycourt titles so far in Charleston and Stuttgart.

Yet Stosur, having not played a competitive match since Charleston due to injury and despite dropping the first set, showed why she continues to be considered one of the game’s premier clay courters.

She produced an incredible 14 aces – to just two double faults – and won almost 90 per cent of points behind her first serve.

Tomljanovic brushed aside the 18-year-old 6-4 6-3 in just one hour and 13 minutes and will next face Victoria Azarenka, who overcame Venus Williams in round one.

Gajdosove moved ahead 3-2 in the first set yet lost 10 straight games to exit the tournament.

“(I’ve) been sick since I got on the plane to Madrid … yesterday was my first hit,” she revealed on Twitter.

“I really wanted to play again. It’s been so long since Indian Wells (when she last played) and I missed it. But my body and stomach couldn’t do it and last few days of no hitting showed on court today as well my legs and movement.

“I will get back on practice court again to get ready for Rome. Still lot of tournaments ahead of me. Very sad and disappointed but can only do so much. Need my body to be healthy again!”

Earlier on Sunday, Thanasi Kokkinakis continued his stellar form on the ATP Tour in 2015 by qualifying for the main draw in Madrid.

Kokkinakis came through a tough match against former top 10 star Janko Tipsarevic, the Serbian on the comeback trail after an injury-plagued 18 months.

The South Australian won 6-3 4-6 7-6(4) in a match lasting almost two-and-half hours, a victory helping him qualify for his fifth ATP main draw of the year.

It takes his win-loss record this season to 20-8.

In the first round of the main draw, Kokkinakis will come up against American Sam Querrey.