Tough draws for Aussies in Madrid

Australia's women have been dealt tough draws at the Mutua Madrid Open, while our men open against qualifiers at the combined ATP-WTA event in the Spanish capital. 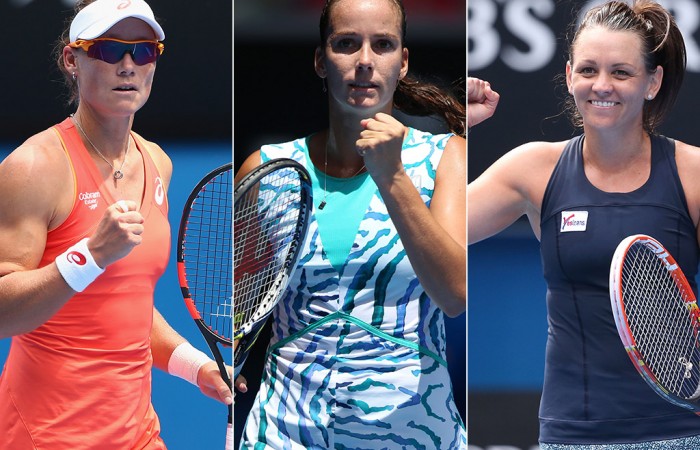 Australia’s women have been dealt tough draws at the Mutua Madrid Open, the biggest claycourt event outside of Roland Garros.

The tournament, which begun this weekend, sees Sam Stosur lining up against No.12 seed Angelique Kerber and Jarmila Gajdosova taking on fifth seed Caroline Wozniacki.

Kerber is on an 11-match winning streak after winning WTA Premier claycourt titles in Charleston and Stuttgart; in the final at the latter, she beat Wozniacki in a thriller.

Unlike Stosur and Gajdosova who face in-form seeds, Casey Dellacqua takes on No.9 seed Agnieszka Radwanska, who is just 13-11 on the year and playing on her worst surface.

Dellacqua comes into that second-round match with a win under her belt, having beaten Francesca Schiavone in her opening match.

Another Aussie, Ajla Tomljanovic, takes on Belinda Bencic in the first round.

On the men’s side, young Aussies Bernard Tomic and Nick Kyrgios open their Madrid campaigns against qualifiers.

Yet should they get through, the going gets much tougher.

Kyrgios would face a second-round meeting against No.1 seed Roger Federer in what would be a blockbuster match in the Spanish capital, while Tomic would most likely play 15th seed Kevin Anderson, should the South African get past Italian Simone Bolelli.

Thanasi Kokkinakis could join the duo in the main draw; he plays Janko Tipserevic in the final round of qualifying on Sunday after beating Matteo Viola for the loss of just three games in round one.

Also in action on Sunday will be Stosur, Gajdosova and Tomljanovic.