Australian Nick Kyrgios will play for the first title of his career on Sunday when he takes on two-time finalist Richard Gasquet at the Estoril Open in Portugal. 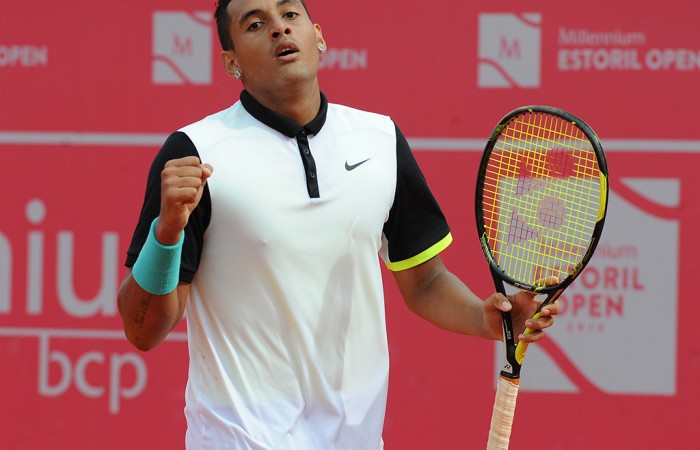 Australian Nick Kyrgios will play for the first title of his career on Sunday when he takes on two-time finalist Richard Gasquet at the Estoril Open in Portugal.

Gasquet, seeded fifth, flirted with disaster as he was broken while serving for victory, before recovering in a runaway tiebreaker for a 3-6 6-2 7-6(1) result over another Spaniard, Guillermo Garcia-Lopez.

It was the first loss in nine claycourt matches this season for Garcia-Lopez, winner of the Bucharest trophy last weekend.

Gasquet, runner-up in 2007 and 2012, and Kyrgios played twice last season, the Frenchman winning a Davis Cup rubber and Kyrgios coming out ahead in their Wimbledon second-round clash.

Both finalists are returning from six-week injury spells, with Kyrgios out with an ankle problem and Gasquet dealing with back pain.

The 46th-ranked Kyrgios put his pre-French Open campaign back on track after losing early a week ago in Barcelona while holding two match points against a qualifier.

The 20-year-old finished off Carreno Busta with 15 aces and a break in each of his successful sets.

“I am very excited to play my first final. I played very good tennis this week,” said Kyrgios, moving closer to a possible seeding at Roland Garros when the claycourt Grand Slam begins in three weeks.

“I’m enjoying myself a lot. Today was a tough match.

“He played very well in the first set failed very little and gave me little opportunity in the second and third set.

“I thought I served well the whole match and got some chances on his serve. I kept pushing after losing the first set and I thought I hung in well.”

Kyrgios has made major strides this week in his Portuguese debut, playing his first semifinal at the ATP level.

He stands 8-4 this season while his 43 aces lead that count this week in Portugal.

Gasquet is on a mission of his own after a patchy season of injury, with the world No.28 playing his last clay final in Estoril in 2012 and winning his last title on the dirt in Nice in 2010.