Australia's Nick Kyrgios has powered into his first ATP semifinal after sweeping Dutchman Robin Haase aside 6-3 6-4 at the Estoril Open in Portugal. 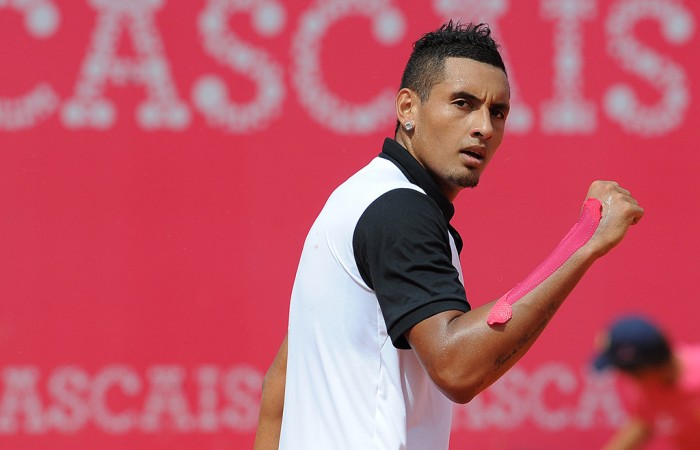 Australia’s Nick Kyrgios has powered into his first ATP semifinal after sweeping Dutchman Robin Haase aside 6-3 6-4 at the Estoril Open in Portugal.

The seventh-seeded Kyrgios, ranked 46th and playing only his second event after returning from six weeks on the sidelines to rest an ankle injury, will next play Pablo Carreno Busta, who beat eighth seed Gilles Muller 6-2 6-4, for a spot in the Sunday title match.

The only other remaining seed is be fifth seed Richard Gasquet, who came from 2-5 down in the second set for a 6-1 7-6(4) defeat of Spaniard Nicolas Almagro and will face experienced Spanish campaigner Guillermo Garcia-Lopez in his semifinal.

Kyrgios, who turned 20 at the start of the week, has played quarterfinals at Wimbledon and at the Australian Open but has until now been yet to replicate his feats at smaller ATP World Tour events.

“I felt very confident, I moved well and served well, I’m very happy with my game right now,” he said.

“I was solid and feel like I’m improving with each match.”

But Kyrgios warned: “I’m certainly not the favourite against Pablo Carreno Busta. He grew up playing on clay and loves these conditions. It will be very tough for me.”

He quickly bounced back from an early break to level at 2-2 in the first set, then broke for 4-2 and closed out the set in less than half an hour.

In the second, he broke midway through and eventually finished up the winner on his first match point.

Meanwhile, Gasquet was pleased to get past Almagro, one of seven active players with 200 claycourt career wins.

“It’s always a a battle with him,” he said. “He’s physically strong and doesn’t miss much. He is one of the best on clay.

“I’ve said all week it’s too early to speak of the final, I have another tough match to play. We will see what will happen.

“My back has been improving all week and I’m serving and playing with more confidence.”

Coric lost 6-3 7-6 (4) after Garcia-Lopez battled back from 5-1 down in the second set after winning the first.

The Spaniard has now won his last eight matches on clay.