The Australian boys’ team has qualified for the finals of the ITF World Junior Tennis competition after competing at the Asia/Oceania qualifying event in Bangkok, Thailand last week. 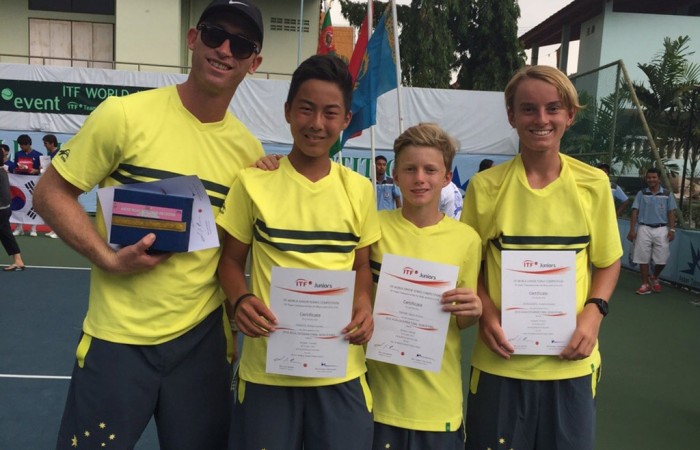 The Australian boys’ team has qualified for the finals of the ITF World Junior Tennis competition after competing at the Asia/Oceania qualifying event in Bangkok, Thailand last week.

The boys’ defeated third seeds Japan 3-0 to secure their spot at the world finals in the Czech Republic in August and finished third overall in the competition.

Chinese Taipei, China and Korea have also qualified for the finals.

National Academy Coach Queensland Adam Carey is captaining the side and is happy with the way the team have trained over the past week.

“The girls used the week of training in Melbourne to get to know one another and to work on getting used to the change from clay back onto hardcourt,” Carey said.

“All three girls are really excited about the opportunity to represent Australia and can’t wait to test themselves against the best Asian tennis nations.

“This is a great chance for the team to support each other and enjoy the experience of travelling to an international event.”

This week the girls’ are the third seeds for the competition and have drawn Uzbekistan, Hong Kong and No.8 seeds Thailand in their pool. They will play Hong Kong in their first round-robin match and will need to advance to the semifinals in order to join the boys’ in the Czech Republic.

The finals will be played in Prostejov, Czech Republic from 3-8 August 2015. Germany and Russia will enter the 2015 competition as defending boys’ and girls’ champions respectively.