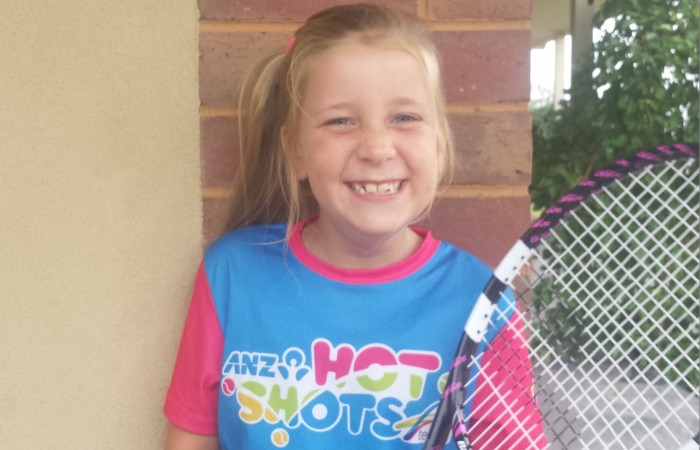 Chantelle McCormack of Doreen, Victoria will join the world’s biggest tennis stars at Australian Open 2016 after being selected as an ANZ Tennis Hot Shot of the Year nominee.

Chantelle will receive a money-can’t-buy VIP trip to Australian Open 2016 as well as an ANZ Tennis Hot Shots equipment pack, including a mini net, racquets and balls.

Currently playing Hot Shots at St. Lukes Tennis Club in Thomastown, Chantelle is aiming to improve her tennis skills and be as good as her idol Victoria Azarenka.

The seven-year-old is looking forward to playing on centre court at Melbourne Park like some of the world’s best.

“I will hopefully meet some top tennis players like my idol Victoria Azarenka and get the chance to play on Rod Laver Arena or Margaret Court,” said Chantelle.

Chantelle also has also set herself some serious goals.

“My goals are to keep getting better with lots of practice so that one day I can play in the Australian Open,” she said.

In January, Chantelle will join 11 nominees at Melbourne Park where the ANZ Tennis Hot Shot of the Year will be selected at an official awards night, as well as go behind-the-scenes at the tournament and play on the same courts as the world’s best.