Living in the moment, Hon soars

Six months ago, Priscilla Hon was at a low ebb, but a change in mentality has seen the 16-year-old drastically reverse her fortunes and capture her first professional title. 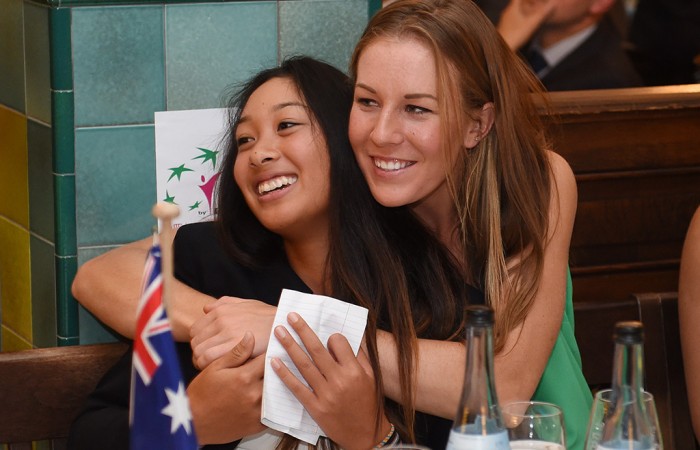 Six months ago, Priscilla Hon was at a low ebb.

Struggling to find her form after an injury-marred start to 2014, she had little confidence and could barely string consecutive match wins together in the junior ranks.

Fast forward to March 2015, and she was lifting the trophy in Mornington after capturing her first professional title on the Australian Pro Tour.

Even the 16-year-old herself found it hard to comprehend such a drastic turnaround in fortunes.

“When I won I didn’t know whether to cry or smile, I wasn’t sure what to do. Also I don’t think it really sunk in because that night I went to bed at 10.30 and I could not sleep until like three o’clock in the morning. So I literally had three hours sleep.

“But I was just so happy to just get some matches, and I’m just happy with my tennis at the moment.”

Incredibly, Hon was a qualifier in Mornington, having to win seven matches – rather than the standard five in a 32-player draw – en route to the title. Her form was so impressive that she did not relinquish a set in her first six.

And it was the continuation of her winning form earlier this season on the Pro Tour. She qualified for the main draw on the hard courts of Clare and Port Pirie, and repeated the feat on grass in Mildura – in Port Pirie she advanced to the quarterfinals. With her title in Mornington, she had won 16 of her past 19 matches.

She credits her purple patch to a shift in her mentality.

“I (am now) just playing point by point, focusing on serving well and just getting returns in the court, and not really thinking about the future, just literally playing point by point and trying to win every point. It helps a lot when you’re just focused on what’s happening and not on the score or anything (else),” she explained.

“I’ve been working on this for maybe the last six months or so; I’ve was still struggling a lot during the first few months of that (time) … I think since I’ve got a few matches in, I’ve got more time on court, and so it’s starting to really work now and I’m starting to get it and my head’s right.”

Another move in the right direction was Hon’s inclusion as an “orange girl” in the Australian Fed Cup squad that travelled to Germany in February for a World Group first round tie.

The call-up was a blessing following a 2014 season that she described as “shocking”.

“I probably needed a bit of inspiration. Alicia (Molik, Australia’s Fed Cup captain) I think saw that and that’s why I think I got chosen to go to help me move along and just get some inspiration out of it,” she revealed.

“That week was amazing. To know the top Aussie girls and just be around them all the time and see what they do, what they eat, literally everything, it really helped, and motivated me a lot. When I came back (to Australia) for my first training session I was just so pumped.”

Since then, she has surged.

The Queenslander is currently ranked 761st on the WTA list, but stands to rise considerably following her victory in Mornington. In 2015 she will play increasingly on the professional tour, but with age-eligibility rules in place, her schedule will comprise a mix of professional and junior tournaments.

With a preference for focusing on short-term goals, Hon is next targeting entry into the qualifying draw of the French Open junior event, beginning in late May.

“Obviously you’ll have a dream to win a Grand Slam like everyone does … (but) probably my next goal is to play French Open; I need to get in with my WTA ranking, not my juniors (ranking) because I haven’t played many (junior events) and also didn’t do great last year,” she said.

“I think I need to get my ranking to be (around) 500, so I’m just out of 500 so I need to do kind of well this week (at the Melbourne Park Pro Tour event) as well. It will definitely be really tough.”

Yet Hon has begun her latest Pro Tour campaign in perfect style; again finding herself facing top seed Zaniewska – this time in the first round – she repeated her Mornington victory, doing so with a more emphatic straight sets win on Wednesday.

Playing on her favoured clay and with her confidence soaring, her exciting upward swing could be set to continue.