Work on the purpose-built grass tennis courts to host the Davis Cup by BNP Paribas World Group quarterfinal tie is progressing at a cracking pace. 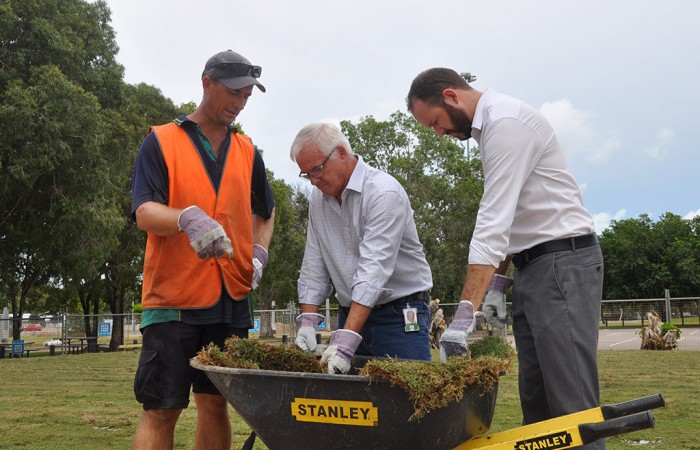 Work on the purpose-built grass tennis courts to host the Davis Cup by BNP Paribas World Group quarterfinal tie is progressing at a cracking pace.

“Marrara will be transformed over the coming months to host one of the world’s biggest sporting events,” Mr Higgins said.

“It is very exciting to see the first stage of works beginning to take shape as the grass courts are laid in.

“Building the courts from scratch is a first for the NT Department of Sport and Recreation and a first in Darwin for Tennis Australia, so curators, organisers and contractors will be keeping a keen eye on the turf.

“Over the next couple of weeks rollers will be running over the turf to ensure the grass flourishes on both the competition and practice courts.

“By the time the Davis Cup quarterfinals roll around in July, the grass courts will be at an international standard supported by world class facilities with beautiful tropical Dry Season weather as a backdrop.

“Interstate and international visitors will certainly be getting the best of what the Northern Territory has to offer and I’m sure many will take the opportunity to stay on and experience our unique tourism destinations.”

Manager of NT Tennis Sam Gibson said it was fantastic to see the courts starting to come together.

“This is just the first step in staging a world-class tennis event like Davis Cup and we’ll be keeping a close eye on the Marrara Sporting Complex during the transformation,” he said.

The Davis Cup by BNP Paribas World Group quarterfinal tiebetween Australia and Kazakhstan will be held from 17-19 July at Marrara Sporting Complex.

Ticket prices and further details will be released in coming weeks.