UPDATE 10am: A back injury has forced Bernard Tomic to withdraw from the BNP Paribas Open at Indian Wells, gifting World No.1 Novak Djokovic a pass into the semifinals. 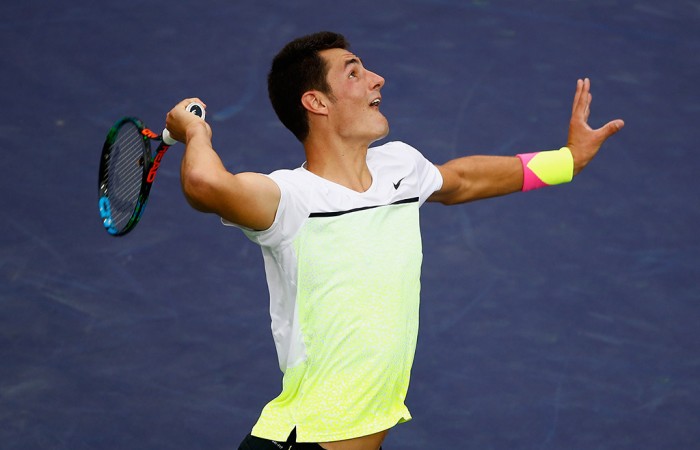 Update 10am: World No.1 Novak Djokovic has advanced to the Indian Wells semifinals without lifting his racquet after a back injury forced Australia’s Bernard Tomic to withdraw from the tournament.

Tomic made his decision to pull out of Thursday’s (Friday AEDT) quarterfinal contest several hours before it was to open the evening session on the Tennis Garden stadium court.

In addition, the Australian was suffering from severe wisdom tooth pain, which he mentioned following his victory over compatriot Thanasi Kokkinakis in the fourth round.

“I went to hit today and my back and low back felt as well I couldn’t even move. On top of that, I had this pain on this side of the face, which is not very good because it’s tough for me to even breathe this side,” he revealed.

“The face is inflamed up even more on the right side of my cheekbone. It’s tough for me to actually like even move and rotate my head at one stage, so I can’t really be turning.

“I feel like I’m not functioning this side well. I’m on medication the last few days for the infected area, my wisdom tooth.

“It’s not something good. It happened to me a year ago. It started for about a week, the pain, and now it’s happening again. It’s time for me, I have to address it and probably remove it. I’m going to look to obviously try to do it the week ahead of Miami or if I can do it sometime then.”

Defending champion and top seed Djokovic will get an extra day’s rest before he faces either Andy Murray or Feliciano Lopez for a spot in Sunday’s final.

Tomic was enjoying his best run in four appearances in Indian Wells, the first time he had reached the quarterfinals of an ATP Tour Masters event.

By reaching the last eight, Tomic progressed to a tour-leading sixth ATP quarterfinal of the season.

He believes the volume of matches he has played in recent weeks has contributed to his physical issues.

“I needed to play these five weeks and something. I needed all these points. It’s probably a rough schedule, but this last month is something I needed to get those points,” he explained.

“(My back has) been pretty much getting a little more worse, and the fact is I have been playing every week and doing so good, playing a lot of matches and pulling up a lot of tight areas in that area. It’s getting sore, and the ATP (physio) said you need to rest five, six days.”