UPDATE: An absorbing battle between two young Aussies has finished with Bernard Tomic outlasting a tenacious Thanasi Kokkinakis to advance to the BNP Paribas Open quarterfinals at Indian Wells. 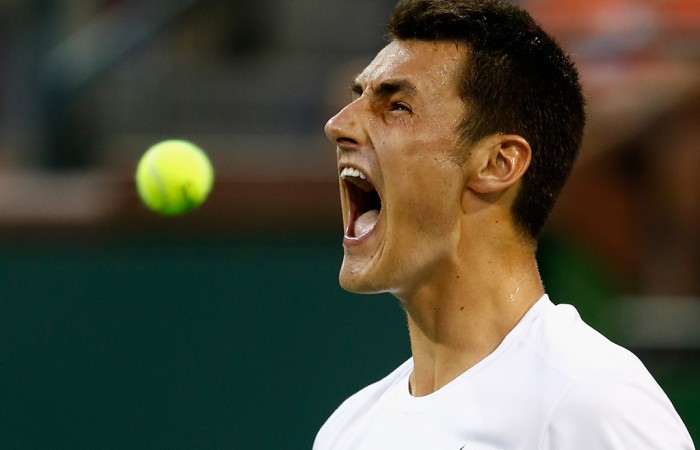 An absorbing battle between two young Aussies has finished with Bernard Tomic outlasting a tenacious Thanasi Kokkinakis to advance to the quarterfinals of the BNP Paribas Open at Indian Wells.

His next opponent will be world No.1 Novak Djokovi, who dismissed American hope John Isner in straight sets under lights on Wednesday night.

After winning the first set, Tomic found himself down 5-2 in the second before rallying late to close the gap to 5-4.

It mattered little as Kokkinakis, a wildcard into the event, closed out the second set and sent the fourth-round match into a deciding set on Stadium 2.

An early break in the third set helped Tomic nose ahead 3-1, and he maintained his advantage throughout the remainder of the set, even reaching a match point in the ninth game on Kokkinakis’ serve.

The teenager saved that with a first-serve-forehand-winner combination, and held to force Tomic to serve out the match.

It appeared the No.32 seed was on track to do this comfortably, when three big first serves – including an ace down the T on the third of those – pushed him ahead 40-0.

Yet Kokkinakis knuckled down, and as Tomic’s first serve wavered, he ensured he got his returns deep into play.

Yet despite dropping four straight points and facing a break point, Tomic admirably hit out amid the tension, drilling a settling backhand winner up the line past Kokkinakis, who chastised himself for not targeting the Queenslander’s forehand.

Kokkinakis errors on the ensuing points allowed Tomic to seal his place in a tour-leading sixth ATP quarterfinal in 2015.