Kyrgios falls to Dimitrov in thriller

UPDATE 1.30pm: Nick Kyrgios has pushed No.11 seed Grigor Dimitrov all the way in a dramatic match at Indian Wells before falling in a third-set tiebreak. 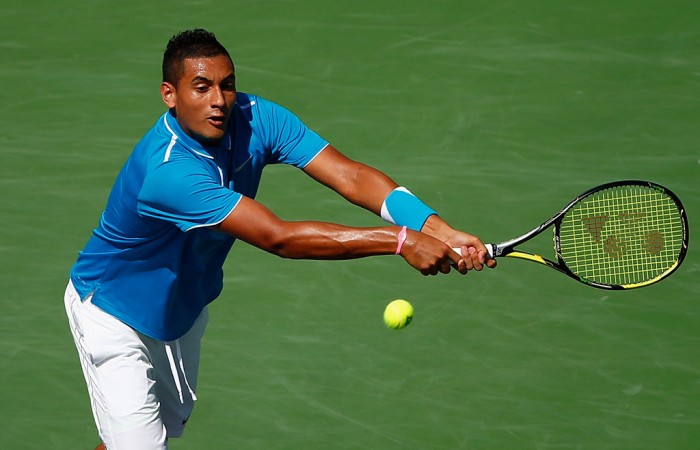 Young Australian star Nick Kyrgios will await scan results on an ankle injury suffered in his second round loss to Grigor Dimitrov at the Indian Wells Masters in California.

“It obviously played a big part in me not serving out the match, because I had not really been broken before that,” said Kyrgios.

On Twitter after the match, he revealed he was headed for tests on his ankle.

“Thanks for the messages guys, heading for a scan in an hour. Fingers crossed! Good match @GrigorDimitrov good luck in the next one #MovingOn,” he tweeted.

The injury came in only Kyrgios’ second match back after suffering a back injury at the Australian Open in January.

However Kyrgios earned praise from former Australian star Paul McNamee for battling on through the injury without an injury time out.

“How refreshing for a player not to rush to an injury timeout and instead just man up, play on and finish the match #fairplay,” tweeted McNamee.

The 23-year-old Dimitrov, who along with world No.39 Kyrgios is rated as a future grand slam contender, found the Australian tough to handle.

“He’s an extravagant player, obviously. He tries a lot of different shots, a lot of unstandard decisions,” Dimitrov said.