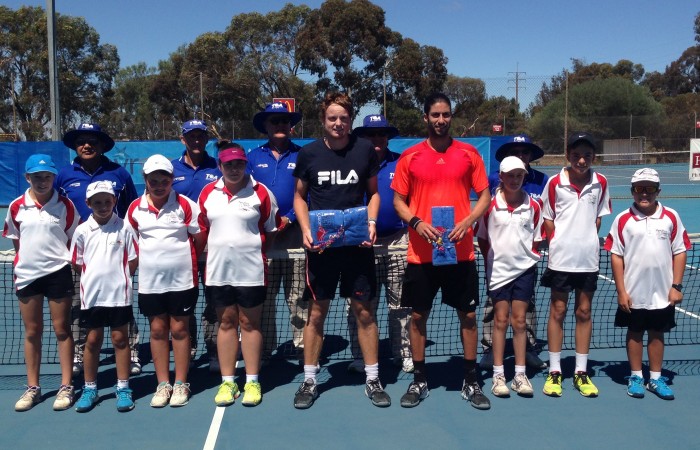 “I’m just really relieved to get the win and pretty excited with the way I’m playing,” Barton said.

The Sydneysider was too strong for his seventh-seeded opponent and never really looked troubled at any stage throughout the match. “I felt like I was in control the whole game,” he said. “I had a bit too much firepower for him in the end, I think.”

The title marks the first for the 23-year-old since he won an ATP Challenger event in West Lakes – also in South Australia – in February 2013, a win which at the time propelled him to the edge of the world’s top 200.

After sitting out most of 2014 with knee issues, Barton is looking to regain and even surpass his previous heights, with a top 100 berth well and truly in his sights. “My body feels great,” he said, “I’m really happy with the way things are progressing.

“It’s all about moving for me and I feel like I’m starting to move just as well as I was before. That’s a big thing for me.”

In the women’s final, fourth seed Na-Lae Han upset her Korean counterpart Su Jeong Jang 3-6 6-4 6-2. Jang – the third seed – was looking to make it consecutive titles in South Australia after her win in Clare Valley last week, but after starting brightly and standing on the brink of victory with a break in hand in the second set, the teenager was overrun by her more experienced compatriot.

Top seeded Aussies Jessica Moore and Abbie Myers took home the title in the women’s doubles with a 6-0 6-3 win over third seeds Liu Chang and Ran Tian of China. The win made it two-in-a row for Moore who claimed the doubles title at Clare Valley, pairing with American Jennifer Elie.

Also backing up a title win were second seeds Carsten Ball and Matt Reid who edged out Steven De Waard and Jacob Grills 5-7 7-6 [10-7] in an all-Australian men’s doubles final – adding Port Pirie to their success at the Adelaide International last week.