Australia's Jarmila Gajdosova has moved through to the quarterfinals of the Malaysian Open after dispatching Thailand's Luksika Kumkhum in straight sets. 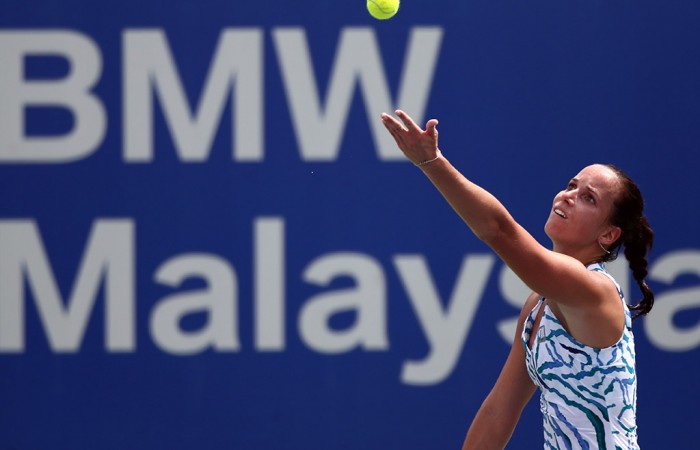 Australia’s Jarmila Gajdosova has moved through to the quarterfinals of the Malaysian Open after dispatching Thailand’s Luksika Kumkhum in straight sets.

The 7-5 6-2 win took her slightly over one and a half hours, the Thai player, ranked 128th in the world, putting up a solid challenge at the start of the match.

“In the first set, I struggled a bit as I found it hard to read her game,” said Gajdosova, the fourth seed.

“But I did not let her hit the ball as much as she wanted, and I managed to outplay her by making her run up and down the court.”

Gajdosova has surged up the rankings in the past year and is now back to No.52 in the world after dropping down to No.334 less than 12 months ago.

In the quarterfinals, she will play No.6 seed Kurumi Nara of Japan.

Meanwhile, little-known Elizaveta Kulichkova cruised through to the last eight after knocking out Kazakhstan’s Yulia Putintseva.

The Russian, ranked 171th in the world and who defeated seventh-seeded Bojana Jovanovski on Monday, beat Putintseva in straight sets 6-0 6-2.

“During the first set things were fine. But when it came to the second set I began to tire, so I went to the rest room and I managed to compose myself for the remainder of the match as it was very tough towards the end of the match,” said Kulichkova.

“This is my first time making it to the quarterfinals, and apart from being happy, I am confident I can go all the way in this tournament as I am playing some of my best tennis now.”