UPDATE: Bernard Tomic has lost to American Donald Young for the second straight week to be eliminated from the ATP tournament at Delray Beach in Florida. 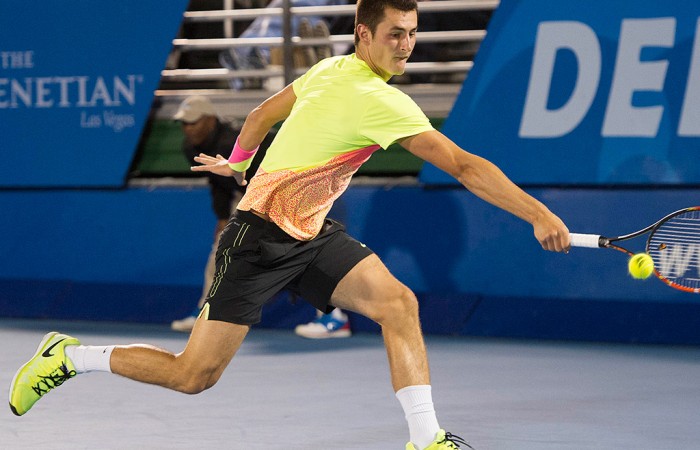 Bernard Tomic has lost to American Donald Young for the second straight week to be eliminated from the ATP tournament at Delray Beach in Florida.

The Australian’s 4-6 6-4 6-2 defeat in Saturday’s semifinal followed his exit to Young at the quarterfinal stage of the Memphis Open last week.

World No.56 Young had eight double faults in the swirling wind but also saved seven of 10 break points, including two at 4-4 in the second set, and two more while serving at 4-1 in the third.

Young will be aiming to win his first ATP title when he takes on Croatia’s Ivo Karlovic, who defeated fifth-seeded Adrian Mannarino of France in the other semifinal.

Karlovic pounded 17 aces and saved all five break points he faced in the 70-minute match won 6-3 6-4.

Karlovic, ranked 29th in the world, will be playing in his 13th ATP tour final. He last captured a trophy at Bogota in July of 2013.

Young withstood 13 aces from Tomic and saved seven of 10 break points he faced.

“My goal was to be more aggressive, move forward, not give (Tomic) too much time to start planning his attack because once he gets you on a string of the way he wants you to play it’s tough to get off of it,” Young said.

On Sunday, the American will be playing his second tour-level final. In his only other championship match he lost to Andy Murray in Bangkok in 2011.

“I lost pretty badly,” Young recalled of that final, adding that he didn’t think it would take another four years to get another title shot.

“It’s tough to get to the finals,” said Young, who is vying to become the third first-time winner on the ATP tour this year.