UPDATE: Bernard Tomic has seen off the challenge of Serbia's Viktor Troicki to advance to the quarterfinals of the ATP Delray Beach Open in Florida. 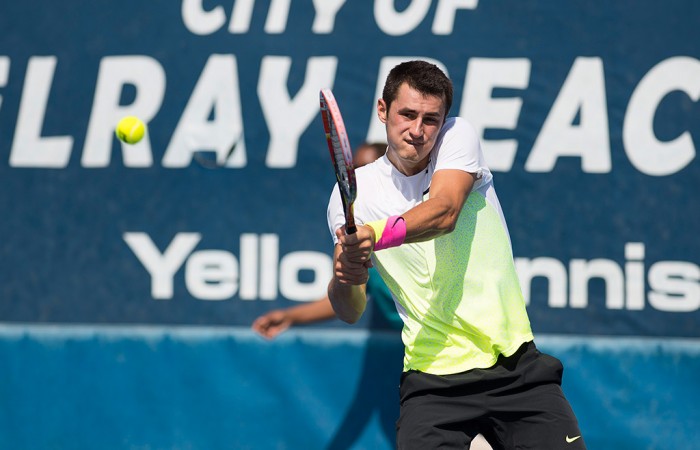 Bernard Tomic has seen off the challenge of Serbia’s Viktor Troicki to advance to the quarterfinals of the ATP Delray Beach Open in Florida.

The Australian battled for almost two hours before subduing the No.8 seed and his doubles partner at the ATP 250 event, eventually winning 6-3 6-7(2) 6-4.

Tomic survived 13 aces from Troicki – who was in great form following his title run in Sydney last month – and an inferior first serve points winning percentage to advance to the last eight, where he will meet Japanese teenager Yoshihito Nishioka.

“Today was very cold so it was tough for both of us,” said Tomic.

“It was good tennis. We both served pretty good. I was happy to win because it’s a tough match playing Viktor.”

Earlier on Thursday, Nishioka booked his place in the quarterfinals with a 6-1 6-3 victory over Tomic’s compatriot Marinko Matosevic.

The 19-year-old Nishioka became the first teenage qualifier to reach the quarters of the Delray Beach Open since countryman, Kei Nishikori, won the title as an 18-year-old in 2008.

“At the beginning I was so nervous, but I think he was nervous, too. I just tried to make every ball. Every shot, I was focused on it.”

Like Nishikori, Nishioka moved to the United States just before his 15th birthday to train at the IMG Tennis Academy in Bradenton, Florida, courtesy of the Morita Fund, a scholarship designed to develop Japanese talent.

His two wins in Delray Beach are the first ATP main draw victories of his career.

He qualified at last year’s US Open, but was forced to retire from his first match due to illness.

Earlier again, Donald Young reached his third quarterfinal in four ATP events this year with a 6-3 6-2 win over Alejandro Gonzalez of Colombia.

Young will play third-seeded Alexandr Dolgopolov for a spot in the semifinals; Dolgopolov beat American Tim Smyczek 6-2 6-4 to reach his first quarterfinal of the year.