Big-serving Ivo Karlovic has outlasted Thanasi Kokkinakis in two tiebreakers in the second round of the ATP Delray Beach Open to end the Australian teenager's four-match winning streak. 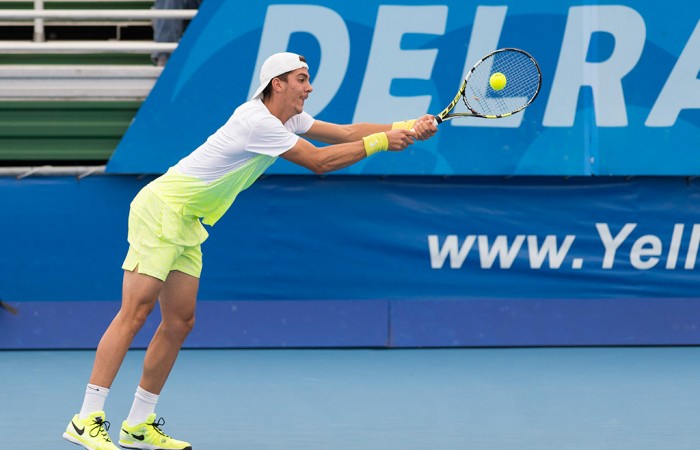 Big-serving Ivo Karlovic has outlasted Australian teenager Thanasi Kokkinakis in two tiebreakers in the second round of the Delray Beach Open.

The fourth-seeded Karlovic, a runner-up here in 2010, moved into the quarterfinals, where he will face seventh-seeded Steve Johnson or 17-year-old Russian Andrey Rublev.

Also advancing was fifth-seeded Adrian Mannarino of France, who needed less than an hour to dispatch Denis Kudla, a 22-year-old American, 6-2 6-2.

Karlovic, a 6-foot-11 Croatian who could be competing on the ATP Champions Tour for senior players, used his serve to overpower Kokkinakis.

“If I didn’t come up against a guy who serves out of a tree like that, I would have had a good chance to keep going,” said Kokkinakis of Karlovic’s 21 aces.

Neither player was able to break serve, though each had chances.

Karlovic double-faulted twice in the second game of the match to set up break points but escaped with strong serves.

Kokkinakis saved two break points while serving at 2-3 in the second set, and had another chance with Karlovic serving at 3-2 in the first-set tiebreak.

After a crafty exchange near the net, the Australian attempted to lob over Karlovic’s left shoulder but the ball fell short, allowing the Croatian to hit a high backhand volley winner.

“Trying that lob was a pretty dumb play,” said Kokkinakis, who gained attention when he played two five-setters during the Australian Open. “That point really killed me.”

At 1-2 in the second set, with Karlovic planted at the net, Kokkinakis drilled a forehand right at his opponent, forcing Karlovic to duck as the ball landed inches inside the baseline.

“He can really hit those forehands so it was really difficult for me,” said Karlovic, who is currently ranked No.29, down from a career-high of No.14 in 2008.

“He’s unbelievable. He’s young and he will be very, very good. I was just hanging in there and serving really well.”