Australian captain Alicia Molik has urged her players to keep believing a drought-breaking Fed Cup title is within reach despite a heartbreaking World Group exit. 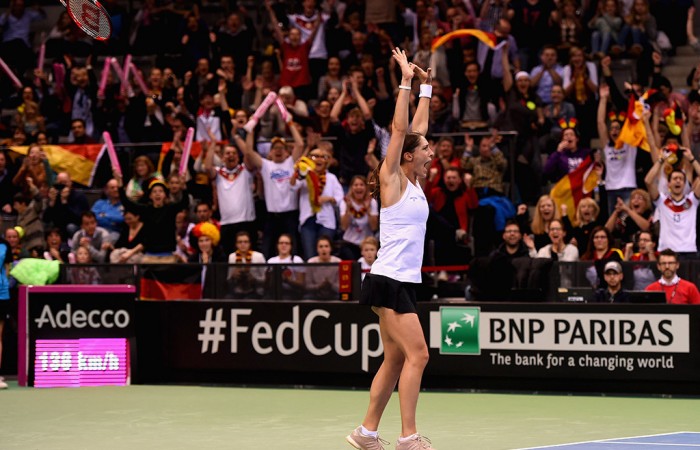 Australian captain Alicia Molik has urged her players to keep believing a drought-breaking Fed Cup title is within reach despite a heartbreaking World Group exit.

Australia were eliminated from the competition’s top tier by Germany for the second successive year in Stuttgart on Sunday, with Sam Stosur and team standout Jarmila Gajdosova suffering final-day singles defeats.

The 4-1 first-round loss on an indoor hardcourt denied Australia a semifinal showdown with Russia and forced them into a play-off in April to fight for a place in the competition’s top tier in 2016.

But Molik says her team proved in Germany it has “the package” to be title contenders next year.

“The belief is still there and I want our women to continue to believe,” Molik said.

While Australia were accounted for relatively easily by Barbara Rittner’s side in last year’s semifinal battle in Brisbane, they pushed the 2014 runners-up all the way in Stuttgart in more than seven hours of singles action.

World No.54 Gajdosova had given Australia a surprise 1-0 lead on day one by upsetting German top gun Angelique Kerber while Stosur had a match point to double Australia’s advantage before losing to Petkovic 12-10 in the third set of a three-hour epic.

Feeling “one point” was essentially the difference between the teams, Molik was left gutted but still optimistic about Australia’s quest for a first Fed Cup title in more than four decades.

“We got to the position that we could have won and I believe we should have been the winners of this tie and that Germany can go on and win the Fed Cup,” Molik said.

“That’s the exciting part, the fact that we’ve got the package – the right players and the weapons.

“We’ve got all the goods to really take us deep into the Fed Cup and I think next year we can really vie for this title once again.”

Top-ranked Australian Stosur admitted her epic battle with Petkovic on Saturday took some gas out of the tank as she fell 6-2 6-4 to Kerber in Sunday’s first match.

“But I was still prepared and ready to play,” the world No.25 said after her fourth straight Fed Cup singles defeat.

“I just don’t think I played as well as yesterday.”

Gajdosova, looking to replicate a win over Petkovic in Sydney last month, was on course to force a deciding fifth rubber when a break up in the third set after staging another fightback from a set down.

However 12th-ranked Petkovic, showing no ill effects from the tough encounter with Stosur, broke back before securing another gutsy win and the overall win for Germany.

Gajdosova’s performances vindicated Molik’s decision to pick her for singles ahead of higher-ranked Dellacqua and continued the 27-year-old’s encouraging comeback from a 2013 illness that saw her ranking plummet to No.334.

“She (Gajdosova) is at the level now taking it to the best in the world and beating them. This should give her a spring her step and a bit of a swagger,” Molik said.