Jarmila Gajdosova has come from a set down to defeat German top gun Angelique Kerber and hand Australia a surprise 1-0 lead in their Fed Cup clash in Stuttgart. 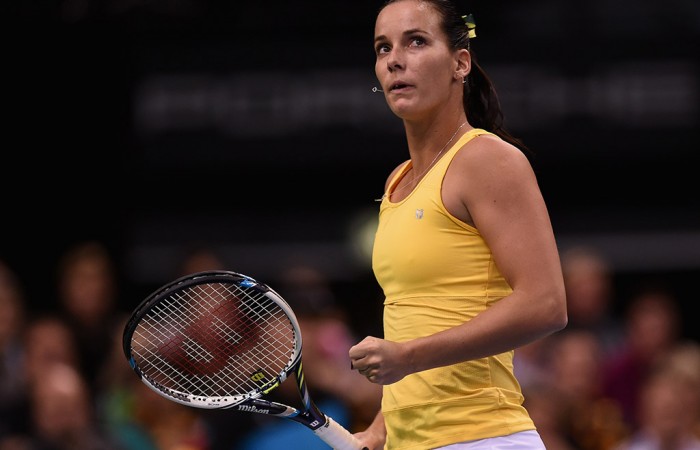 Jarmila Gajdosova has come from a set down to defeat German top gun Angelique Kerber and hand Australia a surprise 1-0 lead in their Fed Cup clash in Stuttgart.

Gajdosova, ranked 54th, produced one of the performances of her career in Stuttgart on Saturday, defeating world No.10 Kerber 4-6 6-2 6-4 in the opening singles rubber of the first-round World Group tie played on an indoor hard court.

It was Gajdosova’s first win over a top-ten opponent since defeating then world No.4 Francesca Schiavone in a 2011 Fed Cup match, continuing an impressive comeback after her ranking dropped below 300 following a debilitating bout of mono in 2013.

“It’s a great win for me and of course it means a lot more to do it in Fed Cup,” said Gajdosova, who had wins over world No.11 Dominika Cibulkova and 12th-ranked Petkovic in Sydney last month.

“I’ve beaten a few good players this summer so I’m glad to add Angelique to those wins.

“I’m enjoying my tennis again. I feel healthy, I’m happy I can compete physically and mentally I feel good. Hopefully I can keep going and the ranking will go forward.”

Molik said on Friday she felt Gajdosova had the power game to rattle Germany’s top-ranked player and so it proved as the 27-year-old hammered 37 winners to 29.

Kerber edged a high-quality first set, with the German securing a single break and giving away nothing on serve.

But Gajdosova maintained an aggressive approach and gained the momentum in the second, converting her first break point of the match to go 4-2 up and breaking again to square the match.

The Australian dropped serve in the opening game of the deciding set but fought back strongly.

She was broken to love when serving for the match at 5-4 up regained composure to break Kerber for the third time in the set to secure a memorable victory with a forehand volley winner in one hour and 49 minutes.