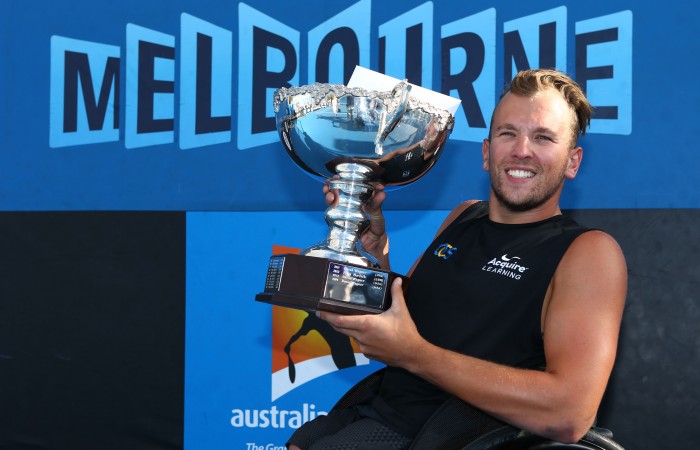 At 6.19pm on a showery yet sunny court 6 on Saturday, the Australian Open men’s quad wheelchair baton was passed from a 40-year-old Californian to a larger-than-life 24-year-old playing in his home city.

It was mightily impressive fare, Alcott egged on by a vociferous and partisan home crowd throughout, which swelled to some 500 fans strong at the close.

Alcott took the microphone to speak to the merry throng post match.

“This is the biggest crowd in tennis I’ve ever seen,” he said in understandably celebratory mode. “Let’s all go and have some beers.”

Alcott is some star. Teenage sensation Nick Kyrgios a huge fan, and was tweeting Alcott within minutes of the final ball.

“I knew everyone in the main stand,” said a jubilant Alcott. “Five hundred people, I know a lot of people in Melbourne, I’m the only guy that goes out regularly. I have 5,000 Facebook friends.”

The joy in beating a legend of the game – Wagner has six slams and gold at the last three Olympics on his CV – was understandable.

“I was a bit nervous when I came out and saw all those people. I lost the first six times we played, it’s the first time I’ve beaten him in a final. He’s a legend of the game, it’s the definition of a dream come true.”

Gold in the Rio Paralympics – Alcott has already landed the top prize as a wheelchair basketballer, at Beijing in 2008 – and the Australian Open are the ongoing and prime goals, he said.

The play itself was straightforward, Alcott dominating from the off, an impressive serve and swinging backhand his core attributes.

Both men vowed to return next year, but with Alcott in overdrive it is difficult to see Wagner, who will be 41 in March, or indeed anyone stepping in between Alcott and his next goal, the US Open in August.

There was no stopping Alcott on Saturday, not even a break for a light shower five minutes or so before the end.

A final word on Kyrgios though, and the link between tennis as we know it and its wheelchair counterpart.

“Nick has been smashing it in the gym, we trained together in Melbourne. Any 19-year-old that is calm and level-headed wouldn’t be in the quarterfinals of Australian Open, you have to take it up to them to win. I love what he is about,” said Alcott.

“He’s a big supporter of me; good on him for treating us like equals in the gym and that’s great for our sport.”