Pat Rafter has stepped down as Australian Davis Cup captain, with Lleyton Hewitt anointed as his long-term successor. 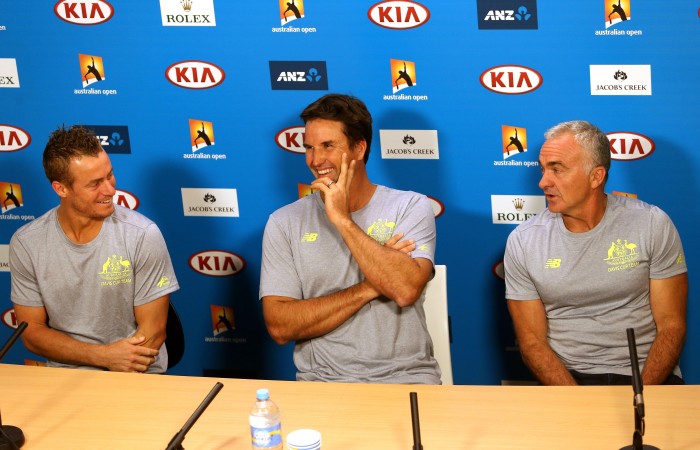 Lleyton Hewitt says farewelling tennis after a record 20th Australian Open tilt next year is the perfect way to end his celebrated career.

Hewitt was on Thursday confirmed as Australia’s Davis Cup captain-in-waiting, with Pat Rafter stepping down and saying the former world No.1 would “fill the spot when the time is ready”.

Wally Masur will officially captain Australia on an interim basis, taking the reins for the World Group first-round tie against the Czech Republic in Ostrava from March 6-8.

Turning 34 next month, Hewitt plans to keep playing on sparingly in 2015, focusing on the Davis Cup and Wimbledon, with the 2016 Australian Open his likely swansong.

The father of three said finishing his career at Melbourne Park would be the perfect way to bow out before taking over from Masur as Cup captain.

“I plan to play the Aussie Open next year and most likely finish then.

“Obviously for me the Davis Cup is something we’ve worked extremely hard to put ourselves in a position in the World Group where we have a genuine shot.

“I believe with the guys now we have a lot more options, a lot more depth.

“I feel like I can still put my hand up as a player and help the boys get over the line.

“Whether that’s singles, doubles, whatever is needed. Right at the moment that’s the main focus for us.

“Personally I’ll be looking towards the grasscourt season and most likely finishing here in Melbourne, which for me would obviously be special to play 20 Australian Opens.”

Hewitt has long been groomed for the Davis Cup role and doubles great and former teammate Todd Woodbridge last week told AAP the dual grand slam champion would be perfect for the job.

“You’ve got no one more passionate about it, no one with more experience.”

Masur said it was an honour to take over the captaincy – even on an interim basis.

“I feel like we’ve got a chance to win the whole thing (this year),” he said.