Kyrgios has Murray in his sights

Nick Kyrgios is compiling a Roger Federer-like early-career CV but says he's not finished yet as he zeros in on an improbable Australian Open semi-final berth. 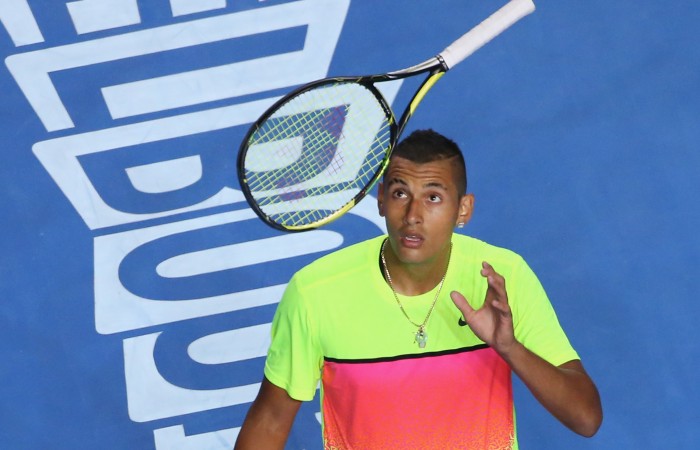 Nick Kyrgios is compiling a Roger Federer-like early-career CV but says he’s not finished yet as he zeros in on an improbable Australian Open semi-final berth.

Without a tour win in four months when he arrived at Melbourne Park last week, Kyrgios admits he gave himself “no chance” of reaching the quarter-finals.

“I definitely believe that I can do it,” Kyrgios said after becoming the first teenager since the great Federer to qualify for two grand slam quarter-finals.

Kyrgios respectfully acknowledged Murray as “one of the best players in the world” and “one of the greatest athletes on the tour” and knows he’ll have to rise to another level to beat the three-time Open runner-up.

But despite enduring two sapping five-setters in his opening four matches – and saving match point in his showstopping win over Andreas Seppi on Sunday night – Kyrgios insists he’s in much better shape to back up for his second grand slam quarter-final.

Kyrgios, quite understandably, was emotionally and physically flat for Milos Raonic at Wimbledon last year after announcing his arrival on the international stage with his earth-moving fourth-round win over then-world No.1 Rafael Nadal 48 hours earlier.

“I think I’ll be pulling up better than I did at Wimbledon,” Kyrgios said.

“I know what to expect now, what I am going to be feeling, especially after a five-set match like that.

“I need to do everything I can: nutrition, get a good night’s rest, do some mobility, get a hit out tomorrow.

“I’ve just got so much more confidence in my body now.

“I was feeling fine (against Seppi). My legs were feeling really good towards the end of the fifth set.

“It’s massive confidence being 19 knowing that you can last matches like that. It’s massive.”

While Federer’s first two grand slam quarter-finals came when he was 18, a year earlier than Kyrgios, the Swiss legend didn’t reach a semi until winning Wimbledon a month shy of his 22nd birthday in 2003.

Kyrgios, who turns 20 in April, certainly fancies his chances of making the last four well before he’s 22.

If not as soon as Tuesday night, the Canberra prodigy already also ranks alongside Federer as one only six teenagers in 47 years of professional tennis to record two grand slam comeback wins from two sets to love down.

Kyrgios’s run to the last eight will also send him rocketing into the world’s top 35, the first teenager to do so since Tomic four years ago.

HOW NICK KYRGIOS AND ANDY MURRAY MATCH UP FOR THEIR AUSTRALIAN OPEN QUARTER-FINAL AT MELBOURNE PARK ON TUESDAY: