Nick Kyrgios saved a match point in an exhilarating comeback win to become the youngest Australian Open men's quarterfinalist in almost a quarter of a century. 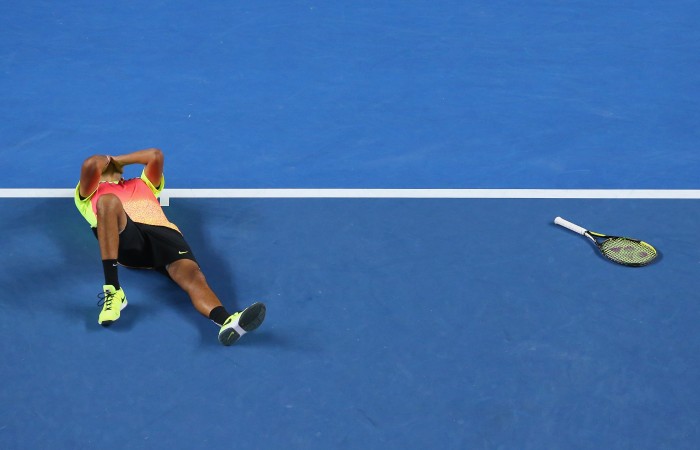 Teenage sensation Nick Kyrgios has saved a match point in an exhilarating comeback win to become the youngest Australian Open men’s quarter-finalist in almost a quarter of a century.

Kyrgios overcame a back injury and a two-set deficit to somehow conjure a magical 5-7 4-6 6-3 7-6 (7-5) 8-6 fourth-round triumph over Andreas Seppi at Melbourne Park on Sunday night.

The colossal fightback over Roger Federer’s conqueror captivated fans at Hisense Arena and catapulted the 19-year-old into a last-eight showdown on Tuesday with either dual grand slam champion Andy Murray or Wimbledon semi-finalist Grigor Dimitrov.

Kyrgios is the first Australian since Lleyton Hewitt lost the title match to Marat Safin a decade ago to make the men’s Open quarter-finals – and, underlining his enormous potential, the first teenager to do so since Andrei Cherkasov in 1990.

Contesting just his seventh grand slam event, the Canberra excitement machine is also the first teen to make the last eight of two majors since the great Federer.

“It feels so good,” Kyrgios said.

“I honestly didn’t think I was going to come back and win that match.

“I was just going to hang in, this is incredible.

“This is my favourite court I’ve ever played on.”

His mobility restricted and explosive power diminished, Kyrgios obliterated a racquet at one point, such was his frustration at being unable to compete at full capacity early on.

Seppi won the opening set after breaking Kyrgios to love in the 11th game.

After fending off a break point in the fifth game, Kyrgios couldn’t hold the Italian out again and found himself in a deep, deep hole after dropping serve for a second time in the ninth game – and then the second set.

But Kyrgios began to mount his stirring fightback as his back appeared to free up in the third set, which the Australian claimed after breaking Seppi for the first time.

Games in the fourth set went to serve before Seppi earned his match point in a tension-filled tiebreaker.

Kyrgios then unleashed a withering backhand winner down the line on his first set point to force the decider.

Australia’s last hope followed up with a vicious down-the-line forehand winner to break Seppi again to seemingly have the veteran on the ropes.

But he inexplicably dropped serve to love in an alarming run of 12 straight points to Seppi, who drew level at 4-4 and then had a break point to give himself the opportunity to serve out the match.

Kyrgios completed his second win from two sets down – after famously staving off nine match points against Richard Gasquet at Wimbledon last year – after three hours and 34 minutes when Seppi wilted and dropped serve to love in the 14th game of the epic final set.

Despite Seppi being ranked only five places above him, Kyrgios’s victory ranks as one of the finest of his burgeoning career.

A one-time world No.18, Seppi sent Federer packing from the Open on Friday and also eliminated Lleyton Hewitt last year.

Kyrgios had beaten Italy’s now-world No.46 in straight sets in their only previous encounter, at the US Open in September.

His victory over Seppi in New York, though, proved to be his last ATP success of 2014, with Kyrgios calling a premature end to his maiden pro season in October, citing fatigue.

Kyrgios’s aching back then forced his withdrawal from this month’s Hopman Cup before he lost a tight season opener in Sydney to Jerzy Janowicz.

Incredibly, after arriving at Melbourne Park without a tour win in four months, Kyrgios is now three wins away from hoisting the trophy.