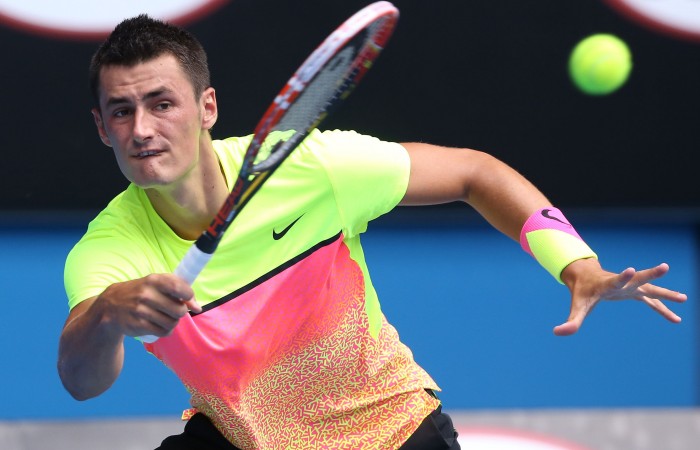 The Wimbledon finalist and world No.7 dealt Tomic a grand slam reality check in a 6-2 7-6 (7-3) 6-2 fourth-round victory at Melbourne Park on Sunday.

Kyrgios plays unseeded Italian Andreas Seppi later on Sunday for a place in the quarter-finals.

Tomic, though, had to settle for another last-16 showing, matching his effort from three years ago, after finding Berdych much too tough a customer.

The big-hitting seventh seed simply overpowered Tomic, whose improved fitness and court coverage was put to the test with Berdych’s brutal groundstrokes.

Tomic was on the back foot from the get-go.

He didn’t offer Sam Groth a single break point in his third-round match, but dropped his first two service games of the match against Berdych, who lost to Novak Djokovic in last year’s semi-finals.

But after steadying, Tomic began to work into the match and make inroads on Berdych’s serve.

Although he lost the opening set in 28 minutes, Tomic had the Czech in trouble on a succession of service games.

Tomic showed grit to save three break points from love-40 down in the ninth game of the second set and stood within two points of snatching the set with Berdych serving at 5-6.

But he was unable to convert and paid the price as Berdych took the tiebreaker and a stranglehold on the match.

Any hopes of a fightback were dashed when Berdych broke Tomic early in the third set before wrapping up the match after one hour and 34 minutes.

While Berdych can look forward to a quarter-final on Tuesday against Rafael Nadal, Tomic will have to settle for a return to the world’s top 50 as he continues his comeback from double hip surgery last year.