Bernard Tomic has upstaged Sam Groth in a high-quality serving duel to storm into the fourth round of the Australian Open at Melbourne Park. 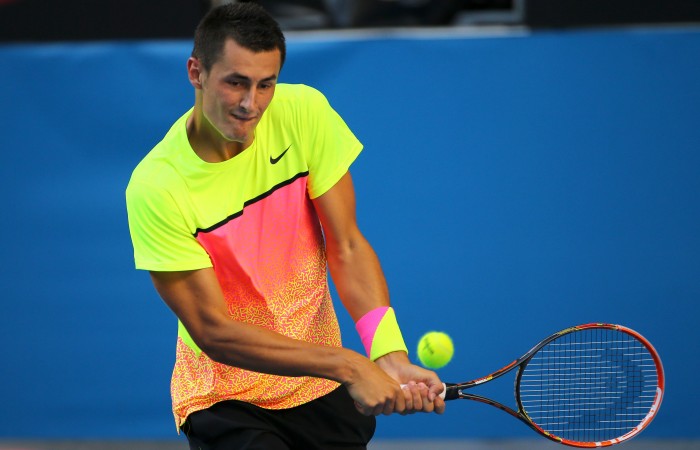 Bernard Tomic has upstaged Sam Groth in a high-quality serving duel to storm into the fourth round of the Australian Open at Melbourne Park.

With a coveted place in the second week up for grabs, Roger Federer’s removal from the Australian pair’s quarter of the draw earlier on Friday raised the stakes even higher.

And Tomic and Groth didn’t disappoint, both serving at over 70 per cent for much of the match.

But it was Tomic, higher-ranked and vastly more experienced on the big stage, who rose his game when it mattered.

He seized the only two service breaks of the match to clinch the first and third sets and held his nerve in the pivotal second-set tiebreaker in another cool and composed display from the one-time grand slam quarter-finalist.

Tomic has lost his only two tour matches to Berdych, both times in four sets at Wimbledon in 2013 and 2014, but enjoyed a win over the big Czech en route to the Kooyong Classic title three years ago.

Berdych knows he has another battle on his hands.

“I’ve played Tomic a couple of times in slams at Wimbledon and they were both very tough matches,” he said after beating Viktor Troicki in straight sets on Friday.

“He really loves to play on grass and they weren’t easy matches at all, but here there’s always a bit extra for him playing in front of home crowds.

“He’s not an easy opponent at all.”

As Groth found out at Hisense Arena.

Tomic played a great opening set, committing just three unforced errors and claiming the only service break in the third game when Groth double-faulted at 15-40.

It was the only invitation Tomic needed as he took the set in 27 minutes.

Groth created the first set point in the second-set breaker, but his booming serve failed him, the 27-year-old double-faulting at the worst possible time.

Groth saved two set points with unreturnable deliveries but a backhand return long gave Tomic a two-set-to-love lead and stranglehold on the match.

Tomic broke again in the third game of the third set before holding firm to march on after one hour and 43 minutes.

Despite his impressive form, Tomic said he’d have to step it up a notch to get past Berdych.

“I’m going to have to prepare really well.”