Nick Kyrgios has overcome nose bleeds, an aching back and a tenacious Tunisian to safely join Bernard Tomic in the last 16 of the Australian Open. 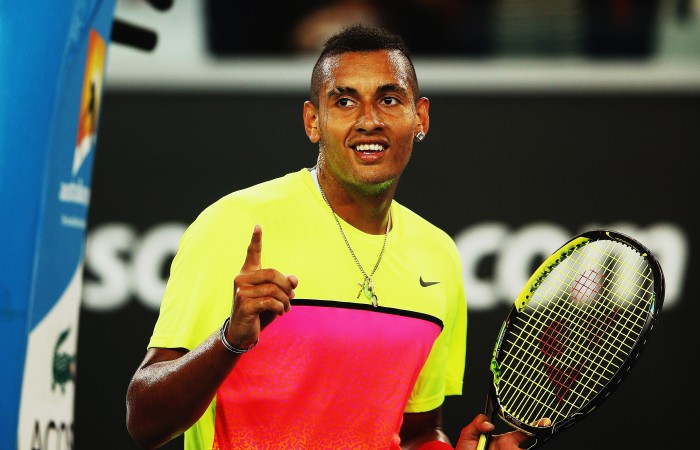 Nick Kyrgios has overcome nose bleeds, an aching back and a tenacious Tunisian to safely join Bernard Tomic in the last 16 of the Australian Open.

Completing a triumphant night double for Australia, Kyrgios ended Malek Jaziri’s surprise run with a 6-3 7-6 (8-6) 6-1 third-round victory over the world No.75.

Incredibly, having not won a tour match since the US Open in September, Kyrgios now has a huge opportunity to emulate his charge to last year’s Wimbledon quarter-finals.

Instead of an expected showdown with Roger Federer on Sunday, Kyrgios will square off with Italian Andreas Seppi, a shock four-set winner over the Swiss superstar earlier on Friday.

Kyrgios took care of Seppi in straight sets in the second round in New York in what proved to be the 19-year-old’s last ATP win of 2014 before calling an end to his exhausting campaign in October.

Kyrgios isn’t taking the world No.46 lightly, but knows the door is ajar to the last eight.

“I’m really looking forward to it, but now I’ve got to prepare and do everything right.”

After withdrawing from the Hopman Cup with a back complaint and losing in the first round in Sydney, Kyrgios hadn’t won a match this year before arriving at Melbourne Park.

“It’s a great feeling. I haven’t played too many matches. It feels good to get some wins at my home slam,” he said.

“It feels awesome coming back.”

After reaching round three with a four-set second-round defeat of towering seed Ivo Karlovic, Kyrgios was well-fancied to see off Jaziri.

He did so, but it wasn’t all straightforward.

Kyrgios was treated several times early on for nose bleeds, at one point needing stuffing to play on.

Jaziri handed him the only break of the opening set with a double-fault and then Kyrgios had to fight back from 4-0 down in the second-set tiebreaker to keep the African at bay.

Into the third round at a major for the first time, Jaziri also needed courtside treatment for a sore serving shoulder and a tightening groin.

And just when Kyrgios seemed like putting the Tunisian to bed, the teenager sought a medical timeout at 4-1 in the third set and dashed off court for a back rub.

But he returned to break Jaziri once more, plunder his 25th ace and finally get the job done after one hour and 58 minutes.