Umina Beach’s Trent Jacob (TJ) Gordon has been named the 2014 ANZ Tennis Hot Shot of the Year at a ceremony held last night at the Melbourne Zoo. 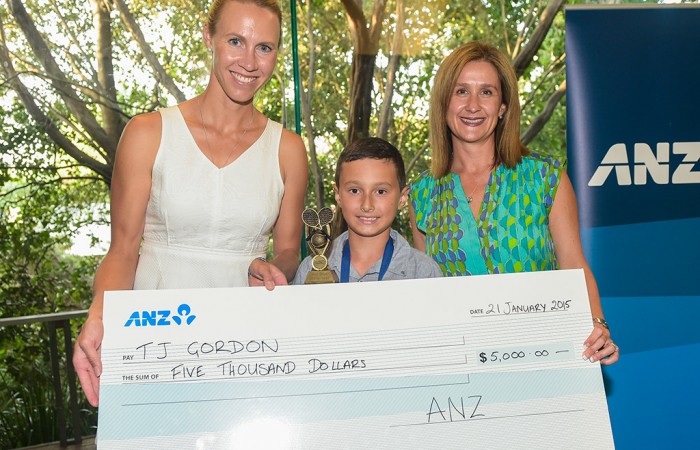 Umina Beach’s Trent Jacob (TJ) Gordon has been named the 2014 ANZ Tennis Hot Shot of the Year at a ceremony held last night at the Melbourne Zoo.

The ANZ Tennis Hot Shot of the Year competition recognises 12 aspiring tennis stars for best demonstrating the spirit of tennis through participation, enthusiasm and enjoyment of the game.

Overall winner, 9-year old TJ who was nominated in February, was awarded $5,000 cash, one year of free tennis coaching and a private lesson from program ambassador and former world No.8 Alicia Molik, to be held at his local tennis club with three friends.

While in Melbourne the competition’s 12 nominees will be treated to a VIP Australian Open experience which includes watching the world’s best battle it out for the Grand Slam title and the chance to practise their skills on the iconic Rod Laver Arena court with Alicia Molik.

“This is a dream come true – I love tennis and love playing it. I am so excited to win this award and have the chance to play on Rod Laver Arena, as well as see my favourite players compete at the Australian Open,” said TJ.

Carolyn Bendall, Head of Marketing, ANZ Australia said: “Over the past year this program has seen some impressive talent emerge from all over Australia. It’s fantastic to support tennis at a grass roots level and celebrate the achievements not only of the deserving winner but of all the players involved. We’ll be eagerly watching TJ and wish them the best of luck in their tennis career.”

For more information about the partnership between ANZ and the ANZ Tennis Hot Shots program visit http://hotshots.tennis.com.au/