Sam Groth has won a rollercoaster five-setter to end the Australian Open campaign of teenage countryman Thanasi Kokkinakis and qualify for the third round of a grand slam for the first time. 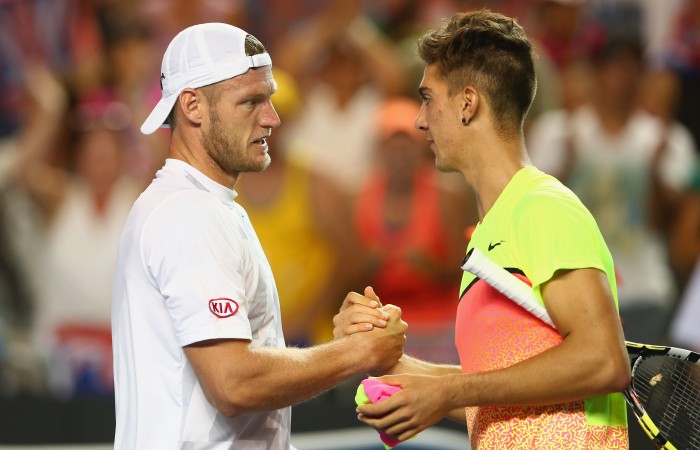 Sam Groth has won a rollercoaster five-setter to end the Australian Open campaign of teenage countryman Thanasi Kokkinakis and qualify for the third round of a grand slam for the first time.

The 27-year-old’s reward is a clash with German 22nd seed Philipp Kohlschreiber or another all-Australian showdown on Friday with Bernard Tomic for a coveted place in the last 16.

“I feel like I’m in career best form and I’m where I’m at in the rankings for a reason,” said Groth, the world No.82 who only broke into the top 100 for the first time last year.

“I’ll come back firing on Friday. I have the opportunity to play in the second week.

“So if I can win another match and get in the second week, I feel like I deserve to be there.”

Despite his confidence, Groth conceded he was still pinching himself at being in the last 32 of a major.

“It’s a fair way from the grass courts of Cowra and Albany,” he said.

“I’m a country boy. I always wanted to play on the big courts. That was my dream. Now I’m living that dream.”

Kokkinakis was valiant in defeat, but admitted he ran out of steam after upsetting world No.13 Ernests Gulbis in his first-ever five-set match on Monday night.

“I felt pretty zapped,” the 18-year-old said after the near-three-hour battle.

Threatening to pull off his second mighty comeback win from two sets to one down in 48 hours, Kokkinakis twinged a hamstring early in the deciding set as the higher-ranked and more-experienced Groth raced to a 5-0 lead before advancing after two hours and 53 minutes.