Stosur into Australian Open second round

Samantha Stosur has continued the hosts' golden start to the Australian Open with an impressive straight-sets first-round victory over Monica Niculescu. 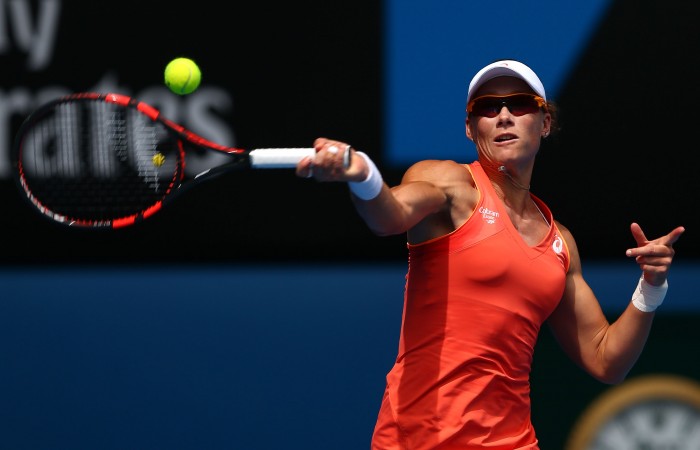 Samantha Stosur has continued the hosts’ golden start to the Australian Open with an impressive straight-sets first-round victory over Monica Niculescu.

Stosur outclassed the Romanian 6-4 6-1 in 79 minutes to book a second-round meeting on Thursday against veteran Italian Francesca Schiavone or young American Coco Verdeweghe.

The former US Open champion is bidding to progress beyond the fourth round at Melbourne Park for the first time in 13 attempts.

“There’s obviously a few more nerves here in a grand slam but I did alright.”

The 20th seed’s win gives Australia eight players in the second round, with four more playing later on Tuesday.

With the pressure on to deliver after early exits – again – in Brisbane and Sydney, Stosur made an understandably nervous start, shanking a couple of groundstrokes early and having to save a break point in her second service game.

But once she adjusted to Niculescu’s unusual, squash-style forehand slice, she was able to dictate proceedings.

The one-time world No.4 broke the world No.48 in the ninth game and closed out the opening set with a perfect service game, landing four first deliveries to hold to love.

Stosur unleashed a stinging backhand pass and then a forehand winner to snare an early break in the second set before racing away with the match.

Australia’s only other seed, Casey Dellacqua, also begins her campaign on Tuesday.

The 29th seed plays Austria’s world No.93 Yvonne Meusburger, while Olivia Rogowska takes on the 96th-ranked Nicole Gibbs of the USA.