Kyrgios into Australian Open 2nd round

Nick Kyrgios needed a medical timeout, a new racquet and five sets to progress to the second round of the Australian Open. 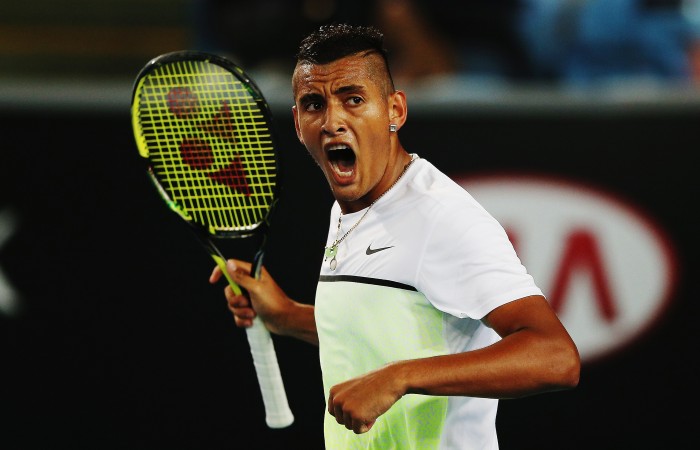 Nick Kyrgios needed a medical timeout, a new racquet and five sets to progress to the second round of the Australian Open.

Kyrgios took control of the topsy-turvy match in the deciding set with 11 consecutive points that helped rocket him to a lead of 4-1.

The unseeded Delbonis continued to fight in the 188-minute battle, but couldn’t break back as Kyrgios cranked up his serving speed to 210kph and attacked at almost every opportunity.

“I wasn’t feeling too confident in my game … I haven’t played a lot of matches recently, so I’m really happy I got over the line,” Kyrgios said.

“It (back injury) is fine, I guess. I got through the match and I’m really happy with how I’m pulling up physically.”

Kyrgios, the top-ranked local men’s hope in Melbourne at world No.53, admitted pre-match he would not be 100 per cent fit due to the back problem that forced him to miss the Hopman Cup.

That was apparent in the opening set when he swapped breaks and went off the court for treatment on his sore back.

The 19-year-old grabbed the early advantage with a polished performance in the tiebreak, when he had four set points but needed only one.

Momentum shifted in the second set, when Kyrgios destroyed a racquet in anger.

Having gone down 4-1 in the second set after failing to convert two break points, Kyrgios smashed the offending racquet into the court.

The right-hander from Canberra was cautioned over the incident, regained his composure to save four break points and hold serve but lost it again to help Delbonis reach 5-2.

Kyrgios, who was vocal and demonstrative throughout the match, gave up a point penalty for a fiery outburst.

Kyrgios responded with an early break in the third set, which he closed out in a dramatic service game.

Delbonis then grabbed a late break in the tiebreak to push it to a fifth set, but Kyrgios steadied in style.