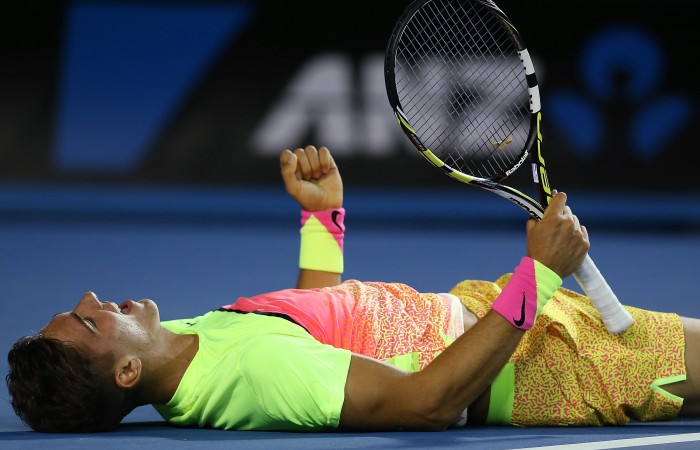 Kokkinakis burst onto the scene a year ago with a four-set first-round triumph over world No.73 Igor Sijsling.

If his 2014 win was an arrival, his 2015 triumph over the French Open semi-finalist felt like a coming of age.

Kokkinakis lived on the edge over the final two sets, fighting off 10 straight break points to pull through after four hours and six minutes to keep his Open dream alive.

The teenager’s memorable win set up an all-Australian second-round clash on Wednesday with Sam Groth.

Up two sets to one and a break, Gulbis powered to a 19-point winning streak and looked to be steaming home to a win his seeding merited.

But the world No.147 had other ideas.

The Latvian won the winners count 72-41 but was found wanting in the crucial moments.

All up, Kokkinakis saved a remarkable 14 break points in his first-ever five set encounter.

His most crucial came through a challenge at 6-all in the fifth set, with the match in the balance.

The review showed the faintest of trickles on the baseline, giving Kokkinakis another life.

He would not waste it.

As Gulbis’ energy drained into the fifth hour of the match, Kokkinakis hung tough.

In the decisive fifth set, break points were few and far between, with both men holding the line.

After 22 straight holds of serve, Kokkinakis finally broke to seal victory to the delirium of the packed outside show court.

After the Latvian edged a tense opening set, the South Australian responded in powerful fashion to tie the match a set apiece in just 23 minutes.

His second-set bagelling of Gulbis came without an unforced error and brought the home hope right back into the contest.

The world No.13 responded to break Kokkinakis twice in the third set, racing to a 3-0 lead.

A break back to Kokkinakis was just a blip as Gulbis seemed to find his range.

Kokkinakis was unable to hide his frustration on court, losing 19 straight points, ended only by Gulbis’ double-fault, as the big Latvian took the third set and claimed an early break in the fourth.

But not to be denied, Kokkinakis fought back to force a deciding set after fending off four match points.

The Latvian defeated, Kokkinakis did a lap of the court, high-fiving the support that pushed him to victory.