Viktor Troicki looms as an Australian Open dangerman to avoid after crowning his stirring comeback from a controversial suspension with a second career title. 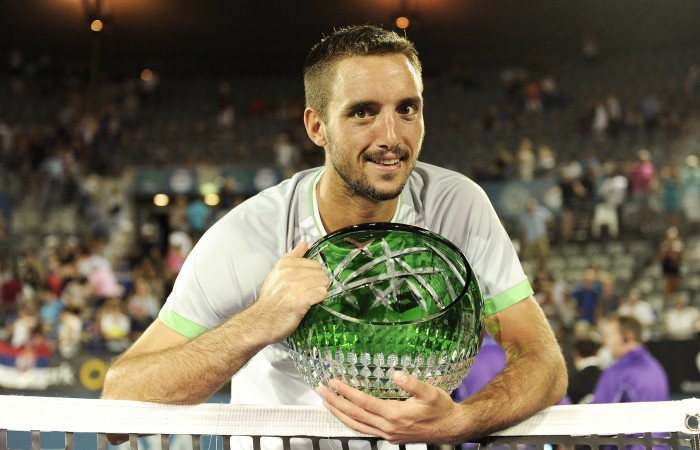 Viktor Troicki looms as an Australian Open dangerman to avoid after crowning his stirring comeback from a controversial suspension with a second career title.

Troicki crushed fellow qualifier Mikhail Kukushkin 6-2 6-3 in the final of the Sydney International on Saturday night in a victory that will send the Serb rocketing back up the rankings.

The one-time world No.12 – who won his first title in Moscow five years ago – spiralled to 847th before his return from exile last July, but will find himself back in the top 70 on Monday.

The 28-year-old was forced to serve a 12-month ban for failing to take a blood test at the Monte Carlo Masters in 2013 and is eager to make up for lost time.

In the first ATP final in history featuring two qualifiers, Troicki dispatched Kukushkin in 64 minutes after breaking the Kazakh twice in each set.

Troicki started and finished the match with an ace, crunching a dozen in all to atone somewhat for his finals loss to Frenchman Gilles Simon at Sydney Olympic Park in 2011.

Troicki’s run in Sydney four years ago preceded his best-ever showing at Melbourne Park, a third-round appearance, and he will fancy his chances of at least matching that in 2015.

In a twist of fate, Troicki will launch his Open campaign on Monday against another victorious qualifier, Czech Jiri Vesely, who earlier on Saturday won the Auckland Open from qualifying.

If he negotiates a path past Vesely, Troicki will face either Australian wildcard John Millman or Argentina’s 26th seed Leonardo Mayer for a place in the last 32.

The first big gun who could strike Troicki in Melbourne is Czech seventh seed Tomas Berdych in the fourth round, or possibly Bernard Tomic in the last 16.

Troicki said it was a special tournament for both finalists and hoped both could cause some damage at the Melbourne grand slam.

“And we both play on Monday, so we are continuing on. There’s no stopping us.”

Kukushkin, who will edge from 66th towards his career-high of 48th in the rankings on Monday, will play Tunisia’s world No.74 Malek Jaziri in his opener in Melbourne.