Petra Kvitova has showcased her Australian Open title credentials with a stylish triumph at the Sydney International on Friday night. 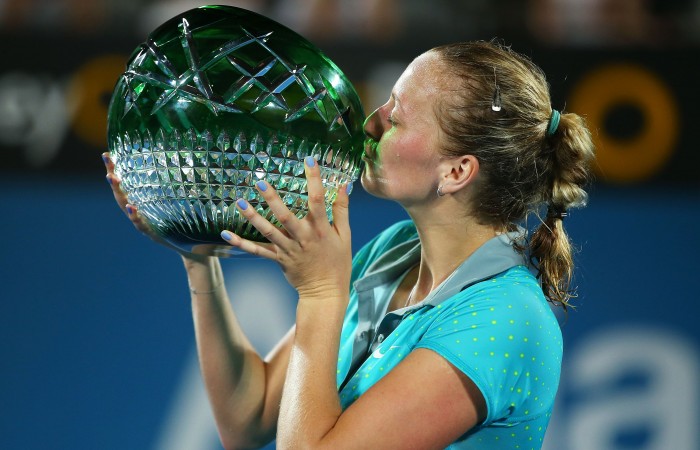 Petra Kvitova has showcased her Australian Open title credentials with a stylish triumph at the Sydney International.

All power and precision, Kvitova quelled Pliskova’s tenacious challenge in one hour and 52 minutes to secure her 15th career title.

Ominously for her rivals, the straight-sets victory marked only the second time Kvitova had ever hoisted a trophy the week before the season’s first grand slam.

After reigning in Brisbane in 2011 as a little-known 20-year-old ranked 34th in the world, Kvitova marched past Samantha Stosur in the third round en route to the quarter-finals at Melbourne Park for the first time.

Four years on and Kvitova is the world No.4 and looms as one of Serena Williams’ biggest threats in Melbourne.

The Open’s fourth seed plays a qualifier first up and landed in Williams’ top half at Friday’s draw, setting the stage for a potential semi-final blockbuster against the world No.1.

A former Australian Open junior champion, Pliskova took the fight to Kvitova, breaking the tournament’s second seed in the second game of the final to seize the early initiative.

But Kvitova clubbed two forehand winners and then unleashed a scorching backhand pass to break back as Pliskova tried to serve out the opening set at 5-4.

After snatching the first set in a tiebreaker, Kvitova claimed an early break in the second and looked headed for a routine win.

Pliskova had other ideas, drawing back on level terms in the sixth game to force another tiebreaker, only for Kvitova’s class to shine through once again when it mattered most.

Underlining her superiority over her compatriots, Kvitova’s win was her 15th in a row against Czech opponents.

Despite the defeat, Plisokova – a nominee for the WTA’s most improved player in 2014 after winning two titles from five finals – will crack the world’s top 20 for the first time on Monday.

Like Kvitova, the 22-year-old also launches her Australian Open campaign against a qualifier.

Kvitova said her hard-earned win three days out from the start of the Open was most satisfying.

“It’s always tough to play a final,” she said.

“I’m glad I stand here as the winner of this tournament. It’s always going to stay as a great memory in my mind.”