Tomic through to Sydney semifinals

Bernard Tomic's positive start to 2015 has continued, with the Australian booking his place in the Sydney International quarter-finals with a 6-3 6-4 victory over third-seeded German Philipp Kohlschreiber. 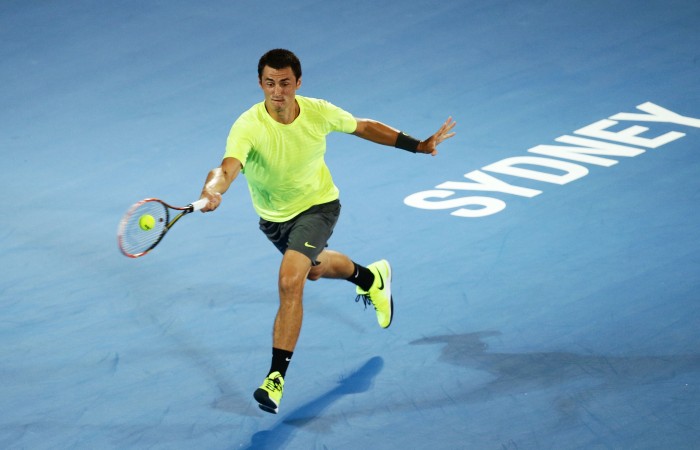 Bernard Tomic’s positive start to 2015 has continued, with the Australian booking his place in the Sydney International quarter-finals with a 6-3 6-4 victory over third-seeded German Philipp Kohlschreiber.

The 22-year-old, who reached the last eight at the Brisbane International last week where he lost to US Open finalist Kei Nishikori, impressed again on Wednesday night on Ken Rosewall Arena as the world No.24 struggled against his big serve.

Tomic, who won this tournament in 2013 and reached the final last year, gave a signal of his intent by slamming down eight aces in the 58-minute match and winning 75 per cent of his service points.

After closing out a close-fought opening set, Tomic began the second with a sizzling forehand return from the baseline on his way to breaking Kohlschreiber’s serve.

Having opened up a 2-1 lead, Tomic found himself 30-0 down on serve but he managed to hold his nerve to win the game before closing out the match on his fourth match point and seal a first ever victory over the German.

“I went for my shots and did the right things and I am very happy with how I played,” Tomic said.

“He’s a very experienced, quality player who has been in the top-20 for a long time.”

Tomic claimed he’s playing better now than he was 12 months ago and believes he needs to maintain his newfound aggressive approach if he wants to become a top-five player.

“If I want to be up there in the top five in the world, I have to be aggressive and build my game to move in the court and really be an aggressive player with a big serve

“You have to realise if you want to be winning grand slams in the future it’s going to come down fitness and strength.

“You want to save as much time as you can in the earlier rounds.

“This is what I’ve come to learn, that fitness and time on court is a big thing.”

It was only the second time the world No.71 had faced Kohlschreiber, who’s been in and around the top-20 for the last five years, but it was the first time he’d beaten the 31-year-old.

“I need to start from that first point and confident in my shots and be very warm and focused from the start,” he said.

“These last two matches I did do it.”