Rodionova and Moore advance in qualifying

Anastasia Rodionova and Jessica Moore will be the only Australian representatives in the second round of women's qualifying for the 2015 Australian Open. 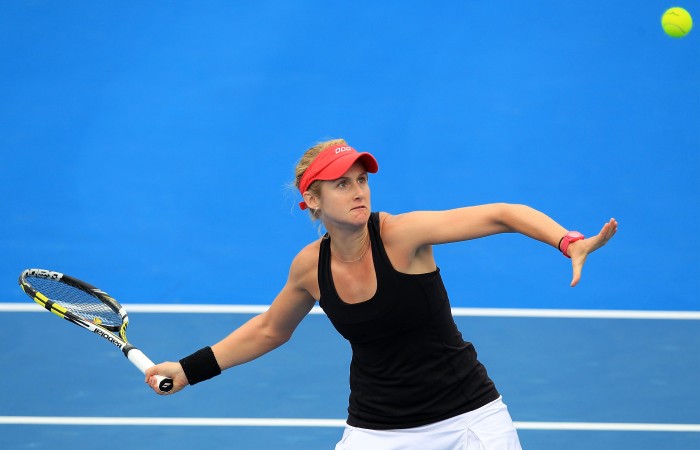 Anastasia Rodionova and Jessica Moore will be the only Australian representatives in the second round of women’s qualifying for the 2015 Australian Open.

Both won tough three-set matches at Melbourne Park on Thursday to advance a step closer to a berth in the main draw of the tournament.

She has set up a second-round encounter with former world No.11 Shahar Peer. Rodionova was buoyant after the win but says there is room for improvement.

“I’m happy to get the win today, I fought pretty hard to win the match and that was probably the key,” she said after the victory.

“I definitely didn’t play my best but I’m happy to get through. I have to just keep playing my game; it doesn’t matter who’s out there, I want to play the way I want to play and stay aggressive.”

Jessica Moore came back from a set down in her match to eliminate French 17-year-old wildcard Fiona Ferro. 1-6 7-5 6-2.

The 24-year-old from Western Australia broke serve at 5-5 in the second set before taking it 7-5. She then powered away in the third set to record a convincing win.

Moore made the second round of the Australian Open way back in 2008 and today’s win was her first at the tournament since that time. She was was relieved with the outcome.

“I finally allowed myself to play some good tennis in the last two sets, so I’m really happy with myself and my team for being so patient.”

The news was not quite as good for six other Australian women who were eliminated in the first round.

Priscilla Hon found Russian 10th seed Evgeniya Rodina a little too classy in a 7-6 (6) 6-2 loss. Maddison Inglis was beaten by American Louisa Chirico in two hard fought sets 7-5 7-5 while Naiktha Bains could not match it with Tunisian Ons Jabeur, going down 6-2 6-1.