Casey Dellacqua will go a second day without competitive play with rain delaying her bid for a quarter-final berth at the Hobart International. 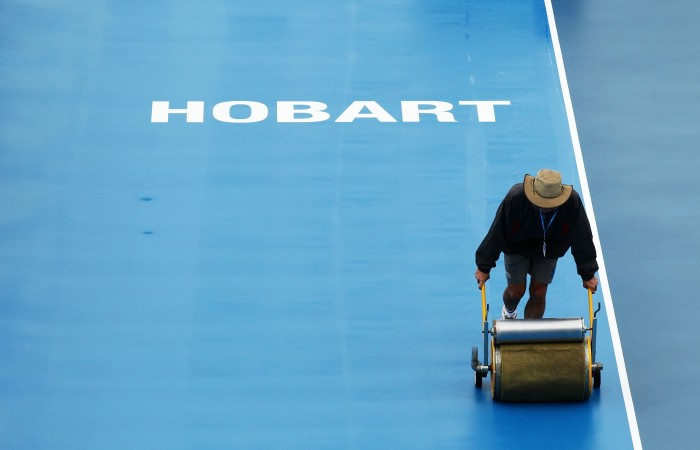 Casey Dellacqua will go a second day without competitive play with rain delaying her bid for a quarter-final berth at the Hobart International.

The event’s top-seed was due to play Italy’s Karin Knapp on Wednesday but a downpour lasting more than 20 hours across the island capital meant players didn’t get a chance to step on court.

“Unfortunately rain has meant that @caseydellacqua match at #HobartTennis is cancelled for today,” the 29-year old’s management @EmageoGroup tweeted.

Tournament organisers soon after confirmed that the Australian’s match will be rescheduled for Thursday.

Following her first-round three-set win over America’s Lauren Davis on Monday, Dellacqua showed surprise that she would not play her second round until Wednesday.

“Oh, really … I thought we may have played every day from now on,” she told reporters.

With the Australian Open just five days away the left-handed world No.29 will be keen to get as much match practice as possible.

Hobart tournament director Mark Handley said he will do whatever he can to facilitate player requests as the schedule is revised.

“I’ll do whatever Casey wants.

“She’s a top seed at a career-high world ranking, she’s Australian, if she comes to me and says she’d like to play at a particular time I’m going to try and honour that request as I would with any of the players.”

Schedules will be revised to try and avoid players having two matches on a day, and organisers will use outside courts to help with the catch up, he added.

The Hobart venue has only one court that is capable of hosting night matches.

Nothing can be done about the weather, except maybe the addition of a very expensive roof, Handley said.