Inclement weather ensured a rusty Nick Kyrgios was made to wait for his comeback match at the Sydney International but it was opponent Jerzy Janowicz who ultimately rained most on his parade. 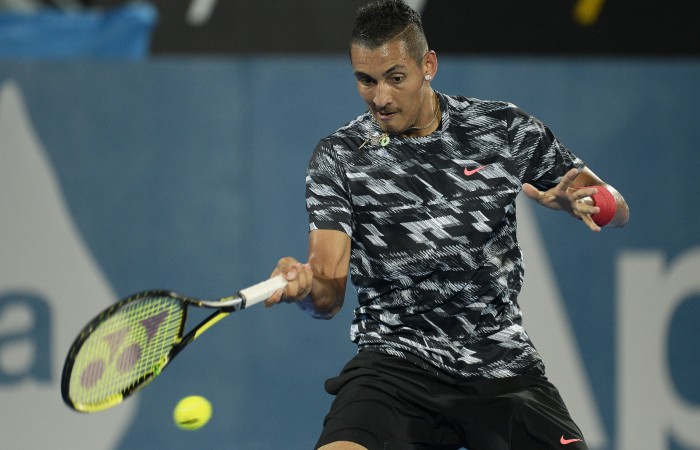 Inclement weather ensured a rusty Nick Kyrgios was made to wait for his comeback match at the Sydney International but it was opponent Jerzy Janowicz who ultimately rained most on his parade.

Still, it was a solid return to matchplay for the 19 year-old who may head to the Australian Open underdone but hardly out of sorts.

The only issue may be whether he sustained an injury in the deciding tie break, Kyrgios appearing to prop on his left knee towards the end of the match.

Playing his first tour match in almost four months after fatigue and a series of injuries kept him on the sidelines, Kyrgios initially had to wait out a rain delay before hitting the court just before 11pm local time.

Keen for some pre-Australian Open matchplay after withdrawing from the Hopman Cup because of a back injury, the Wimbledon quarter-finalist found himself up against a All England Club semi-finalist, and a man in quite the touch having guided Poland to the Hopman Cup title in Perth last week.

Janowicz initially looked like he would make short work of this contest, brushing aside Australia’s top-ranked player in a 23-minute first set.

But the balls that were getting sprayed with regularity in the first set started finding their mark in the second, the 19 year-old showing he was up for a fight.

Over the next two sets little was spared from his arsenal – whipped cross court backhands, dropshots and a couple of efforts between the legs – which didn’t quite come off – were all on display.

The second set became an arm wrestle, Kyrgios taking it off the back of a Janowicz double fault in the tie break.

Kyrgios had the run of play in the deciding set and at 4-all had two points to take a vital break and serve for the match.

But the battle-hardened Janowicz hung in, took the set to a tie break and snatched a mini-break before serving it out.