A "shattered" Nick Kyrgios is unsure about his Australian Open status after admitting his underprepared body continues to let him down. 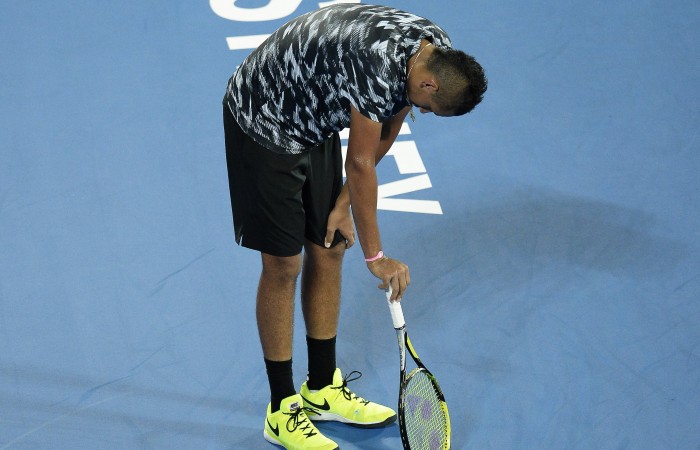 A “shattered” Nick Kyrgios is unsure about his Australian Open status after admitting his underprepared body continues to let him down.

Kyrgios appeared to be bothered by his left knee and back in the concluding stages of his valiant 6-1 6-7 (8-6) 7-6 (7-5) first round loss to Jerzy Janowicz at the Sydney International on Tuesday night.

It was his first match after an almost four-month tournament hiatus because of fatigue and injury.

The Australian men’s No.1 described his back as “not great” and sounded downcast about where he was at physically.

“I am obviously shattered that I haven’t had the right preparation at all for all these tournaments,” the 19-year-old said.

“I am just doing whatever I can to get out there and compete but I am not at the level I would like to be at.”

Asked about playing in the first grand slam of the year he was non-committal.

After what he described as an “appalling” first set, Kyrgios got himself right back in the contest against Janowicz, cutting back on his errors and hitting plenty of free-swinging winners to take the second in a tie break.

He had two break points to serve for the match in the decider but 2013 Wimbledon semi-finalist Janowicz, in great form after leading Poland to the Hopman Cup title, held firm and eventually took out the clash with a third-set tie break win.

The match, which finished in the early hours of Wednesday morning after a rain delay, illustrated at just how high a level Kyrgios can play even with limited preparation.

Yet the greater concern must be whether his body is also up to the task – both in the immediate and longer term.

In his short career the world No.50 has suffered a number of injuries – from shoulder problems to bone stress in his arm which followed his shock triumph over Rafael Nadal at Wimbledon last year.

After losing to compatriot Marinko Matosevic at the Malaysian Open last September he cut short his season citing burnout.

Kyrgios was then set to play in the season-starting Hopman Cup but pulled out because of a back complaint.

“I’m not too sure,” he said when asked about if or how he could prepare for the Australian Open.

“I am shattered at the moment and so I don’t really know what I am going to do.”