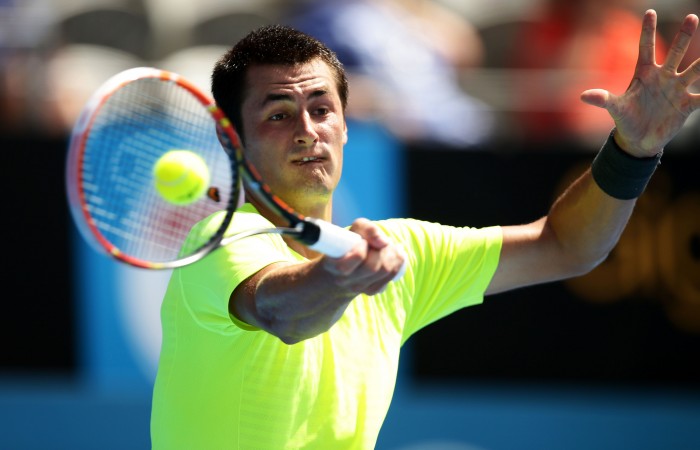 Forget Fast4 tennis, Bernard Tomic gets it done in half the time.

Feeling fitter and stronger than ever following a gruelling off-season, Tomic says he’s a man on a mission in 2015 after losing four months of last season following double hip surgery.

“The bottom line this year is making as many (ranking) points as I can,” he said after setting up a last-16 meeting with German third seed Philipp Kohlschreiber.

“Winning as many matches as I can and staying as consistent as I can, (rather) than winning a tournament and not doing anything for five months.”

With precious few points to defend between now and Wimbledon, Tomic is conscious of the opportunity to rise rapidly from his relatively lowly position of No.71 in the world.

A quarter-finalist at Wimbledon as a teenager in 2011, the 22-year-old craves a seeding at The All England Club in 2015 to maximise his chances of breaking his grand slam duck.

“If I can just remain inside the top 50 or push higher after the Australian Open, this is going to be huge for me,” he said.

Tomic has often talked the talk, but he spent the first half of the summer walking the walk.

Or running, more specifically; putting in the hard yards, getting the miles back in his legs to be peaking for the Open.

“When I was doing so well at 18, 19, I thought naturally everything was going to happen without the hard work, you know, getting inside the top 10,” he said.

“So I knew I needed to get super fit and super strong in areas that were still not 100 per cent, which were my hips and glutes and hamstrings.

“It was tough … It was a long two months of work, but it pays off and I’m feeling a lot better on court.”

For so long, Tomic enjoyed being Australian tennis’s next big thing.

“It’s very motivating for myself and for them,” Tomic said.

The two remain on course for a final rematch after an emotional del Potro made a successful return from an 11-month layoff with an impressive 6-3 7-6 (7-4) first-round victory over Ukraine’s Sergiy Stakhovsky.

The Argentine showed few signs of rust from his lengthy layoff following wrist surgery as he booked a second-round clash with Italian top seed Fabio Fognini.

“It was a great moment for me,” del Potro said.

“These guys are playing all year. It’s time to get back on the train again.

“I just want to play tennis.”

The next tennis Sam Groth will play will be at the Australian Open next week after the big-serving Aussie wildcard crashed out in the first round on Tuesday.

Groth went down 3-6 6-3 7-6 (8-6) against Gilles Muller in a tough blow for the late bloomer after he also lost in a third-set tiebreaker to Milos Raonic in the Brisbane quarter-finals last week.