Stosur in action at Sydney International

Samantha Stosur takes on Wimbledon semifinalist Lucie Safarova in the marquee first-round match-up on Sunday at the Apia International in Sydney. 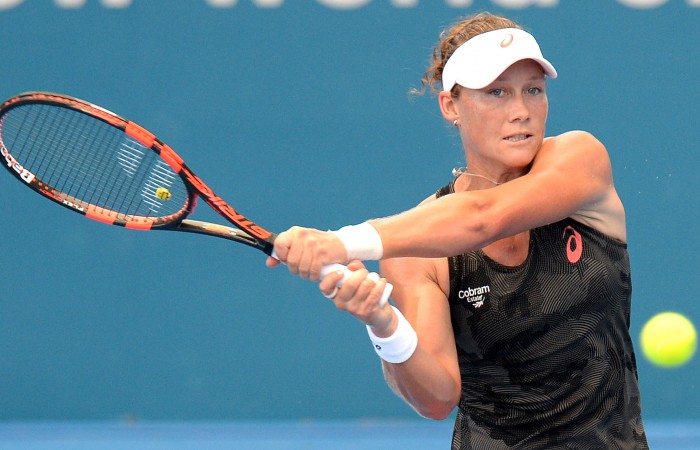 Samantha Stosur knows she needs to find top gear fast if she’s to win a match before the Australian Open.

After crashing out in the first round in Brisbane last week, Stosur gets one last chance to build some momentum heading to Melbourne for the season’s first grand slam event starting on Monday week.

Australia’s top-ranked player admits it won’t be easy at the star-studded Sydney International, where eight of the world’s top 12 women’s players are rounding out their Open preparations.

The cut-off for direct entry for the tier-one tournament is world No.30.

Stosur takes on Wimbledon semifinalist Lucie Safarova in the marquee first-round match-up on Sunday, with the Czech left-hander dominating the pair’s career series 9-2.

“The cut-off’s amazing. I mean, this is one of the toughest draws of the whole year.

“But I guess one of the great things about this tournament going into a grand slam is you’re going to match up against some of the best players in the world and you’re going to see where you’re stacked against them.

“You’ve got to come out playing straight up to win this event. There’s certainly no warm-up matches anymore.”

Victory for the 21st-ranked Stosur, in what would be an upset over the world No.16, would likely set up a second-round clash with fourth seed Caroline Wozniacki.

Australian wildcard Jarmila Gajdosova is also in first-round action at the Sydney Olympic Park Tennis Centre on Sunday, up against German Andrea Petkovic.