Despite the results at the Brisbane International, Sam Groth believes the future of Australian men's tennis is bright ahead of the 2015 Australian Open. 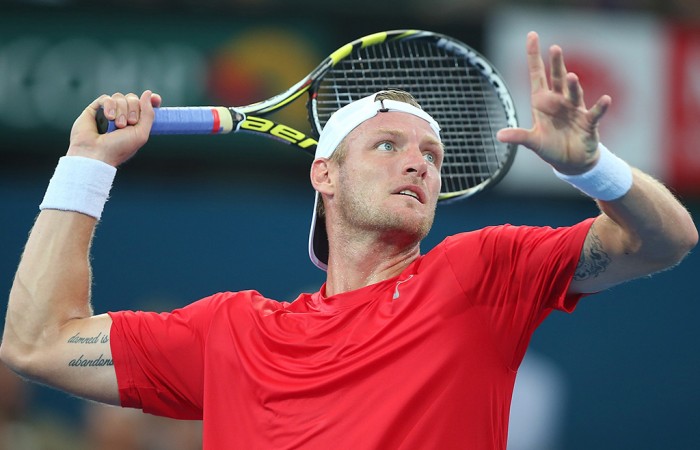 Everyone was thinking it.

And big improver Sam Groth finally said it before Bernard Tomic crashed out at the Brisbane International, as another promising local campaign ended.

But big serving Victorian Groth believes the future of Australian men’s tennis is bright ahead of the opening grand slam in Melbourne.

And Tomic may yet lead the way.

Tomic received a sobering reality check ahead of the Australian Open, losing his Brisbane quarter-final to world No.5 Kei Nishikori of Japan 6-0 6-4 in just 58 minutes on Friday.

Groth was refreshingly honest when asked about Tomic after his own brave Brisbane campaign ended with a tight 7-6 (7-5) 3-6 7-6 (7-2) quarterfinal loss to world No.8 Milos Raonic of Canada at Pat Rafter Arena on Friday.

“He’s a great player, really. I mean, he has his flaws, but everyone does.

“I’m not perfect. No one is perfect.

“If he can knuckle down he’s one of the most talented guys out there.

“Hopefully for him and for Australian tennis he keeps doing well.”

Former Wimbledon quarterfinalist Tomic, 22, was adamant he was on track for a top 20 tilt in 2015.

But he added: “This (loss) just shows you how much I need to work to get to the top.”

Australia started Friday with three locals in the Brisbane quarterfinals but ended it with all crashing out.

Then there was defending Brisbane champion Lleyton Hewitt’s shock first round exit – albeit at the hands of Groth.

However, Groth believed there was plenty for local fans to get excited about ahead of the Australian Open.

Australia have 13 players in the men’s top 250 with Nick Kyrgios, teenager Thanasi Kokkinakis, Tomic and now it seems world No.85 Groth ready to step up.

Throw in Australian wildcard John Millman who gave Federer a second round fright in Brisbane and no wonder top 50 aspirant Groth is excited ahead of what may be a memorable summer Down Under.

“We’ve been saying for a long time now there are Aussies coming through,” Groth said.

“But until it happens people question what’s happening in the system.

“But it’s great that it’s happening here because it makes everybody take notice.

“This is our one time of the year to promote tennis in Australia and promote ourselves.

“I think all the young guys, myself included, are doing a good job.”