Despite his loss to Kei Nishikori at the Brisbane International, Bernard Tomic believes he is capable of making a surge towards the top 20 in 2015. 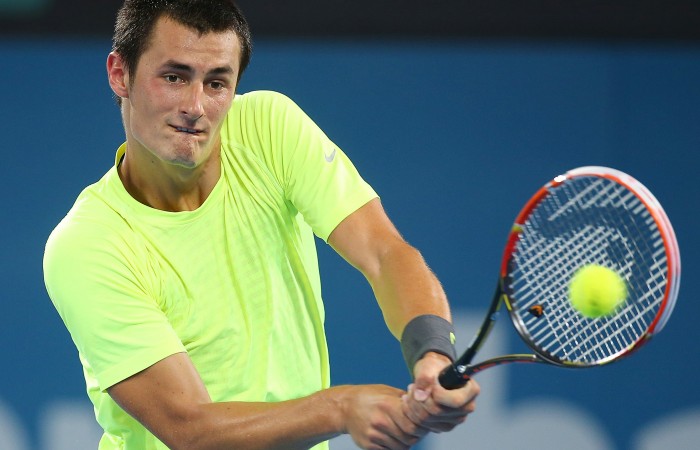 Even Bernard Tomic found it hard to fathom.

But the Australian’s abrupt Brisbane International quarterfinal exit on Friday has not stopped Tomic believing a top 20 surge is possible in 2015.

In a sobering reality check ahead of the Australian Open, second seed Kei Nishikori of Japan took just 58 minutes to thump Tomic 6-0 6-4 at Pat Rafter Arena.

“You change ends and it’s already 6-love – I couldn’t believe it,” a bemused Tomic said.

The scoreline may have left Tomic scratching his head but he remained focused on more Sydney International success next week to help launch his top 20 tilt ahead of the Australian Open.

World No.53 Tomic had built momentum returning from hip surgery that disrupted his 2014 season, claiming a second career title in Bogota.

And after his promising Brisbane surge came to an abrupt halt, Tomic, 22, hopes to take another positive step on the comeback trail in Sydney.

“I don’t defend any (ranking points) for seven months (due to last year’s surgery) so I have to try to get top 20 somehow – I will fight for that.”

And the former Wimbledon quarter-finalist now realises how much hard work lies ahead to achieve that goal.

“It’s probably the best set of tennis someone has played against me in the last 12 months,” Tomic said.

Meanwhile, world No.85 Groth may have been ranked 77 places lower than the big serving Raonic but the 27-year-old did not look outclassed in an encouraging sign ahead of the Australian Open.

Groth – owner of the record for the world’s fastest serve – did not concede a break point in the quarter-final shootout that featured a total of 37 aces including 22 to the Victorian.

Groth said a top 50 berth was realistic if he overcame the unforced errors in the tiebreaks that cost him.

All three remaining Australians bowed out in the quarter-finals on Friday.

But Groth believed the local surge would continue this summer.

Australia have 13 players in the men’s top 250 with Nick Kyrgios, teenager Thanasi Kokkinakis, Tomic and now Groth ready to step up.